Everybody is talking about wireless communications, these days. Even school-going kids are eagerly awaiting the arrival of 5G in their cities. To find a restaurant, to check the least-traffic route or to let our friends know our whereabouts, we rely on wireless networks for one too many things. Indeed, we do take it so much for granted. However, how many of us realise that there are places where service providers shudder to go, where cellular towers are only a distant dream… the deepest jungles, the empty Arctic, the highest altitudes, the barren desserts, the stuffiest mines and the oh-so-fantastic outer space that we all dream about? On the other hand, these are the areas where wireless communication is imperative for success, for survival. As a result, the concerned organisations try untiringly to find all possible means to connect such terrains. With much difficulty some locations have been connected to base stations, while some still remain out of reach. Most success stories too have been possible, not with common commercial networks, but with cutting-edge technologies, radical disruptions and smart changes to existing technologies. 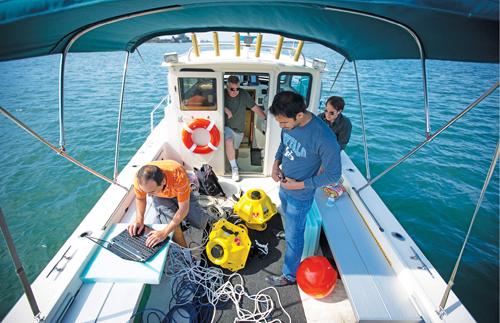 In this story, we look at some such tough terrains, and technologies to connect those.

Deep sea dialogues
Radio waves, so commonly used on land, are severely crippled under water due to limited range and instability. For some time now, organisations such as the US National Oceanic and Atmospheric Administration (NOAA) have been using acoustic waves or sound waves to communicate with tsunami sensors and other such underwater paraphernalia. The problem with this, however, is that such a special non-standard sound-based network cannot directly connect to widespread public networks, making it impossible for messages to be quickly sent to the public or other concerned organisations. This is similar to the problem faced by wireless sensor networks some years ago, till IPv6 over low-power wireless personal area networks (6LoWPAN) became a standardised Internet protocol.

Realising a similar need to connect the underwater world to the Internet, a team from the University at Buffalo, New York, has developed and proposed a new Internet protocol (IP) compatible protocol stack for undersea modems. In a technical paper on the new technology, the authors propose an adaptation layer located between the data link layer and the network layer, such that the original transmission control protocol/Internet protocol (TCP/IP) network and transport layers are preserved unaltered to the maximum extent. The adaptation layer performs header compression and data fragmentation to guarantee energy efficiency. Furthermore, the proposed architecture includes mechanisms for auto-configuration based on router proxies that can avoid human-in-the-loop and save energy when broadcast is needed. 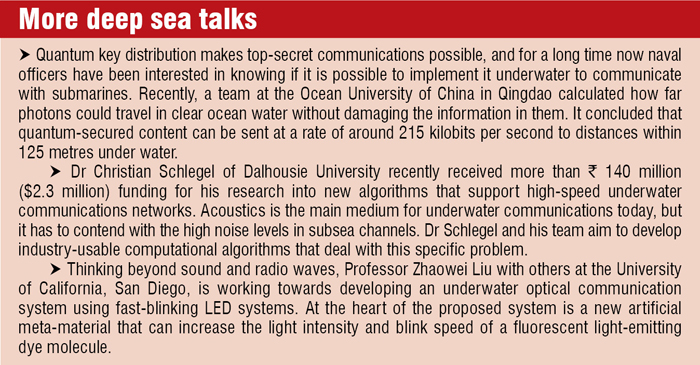 The proposed architectural framework was implemented as a Linux device driver for a commercial underwater network modem SM-75 by Teledyne Benthos. It was tested by dropping two 18.1kg (40-pound) sensors into Lake Erie, near Buffalo, and communicating with them wirelessly using a conventional laptop. This test is a precursor, showing the possibility of implementing the technology in deep waters too.

Sensors and other devices connected using this technology, which they hope to develop into a standard, would be able to readily communicate with other commercial, terrestrial wireless networks—relevant information will be available to any authorised person with a smartphone or computer connected to the Internet! So, if a sensor network detects a tsunami, warnings can be directly issued to all concerned officials or even the public. Sea animals can be monitored. Sly submarines and drug trafficking can be easily prevented. A lot more can be done, basically because the proposed undersea wireless network would be able to connect to the Internet!

Outer space Internet
When we see something new, we want to say lots about it! That is human tendency. Imagine how much an astronaut would want to communicate about the totally unexplored frontiers he beholds. Radio-based communications, of course, is possible from outer space, but NASA felt that it was not efficient enough to transmit heavy videos and data loads from spacecrafts, and so they set about exploring laser-based optical communications. Around a year ago, NASA set about testing a high data-rate laser communication system aboard its lunar spacecraft, the Lunar Atmosphere and Dust Environment Explorer (LADEE). The tests were phenomenally successful, opening the possibility of replacing radio systems with laser systems for faster satellite communications and deep space communications with human or robotic exploration teams.