During the tests, NASA observed that a laser beam sent from an Earth station to LADEE could relay data at the rate of 20Mbps. The downlink, from the spacecraft to the Earth station, could relay data at the rate of 622Mbps. The concerned team noted that six-times-faster communication from the moon was possible with laser instruments that were just half the mass, half the weight and used 25 per cent lesser power compared to radio equipment. Implementing this system in future spacecrafts would make it possible to explore Mercury, Mars and much more of outer space by relaying HD videos captured there, or even telepresence that allows scientists to virtually be there!

Close on the heels of this phenomenal success, NASA is expected to launch the Laser Communications Relay Demonstration (LCRD; http://esc.gsfc.nasa.gov/267/LCRD.html) sometime in 2017, which will test the success of this communication system over a multi-year trial period.

Scaling great heights
Humans seem to be finding some means to communicate with each other from the nooks and corners of the Earth. While at one point of time, mountaineers were totally cut off from base after a certain altitude, today they can communicate even from the middle of nowhere with satellite phones and satellite constellations like Iridium. 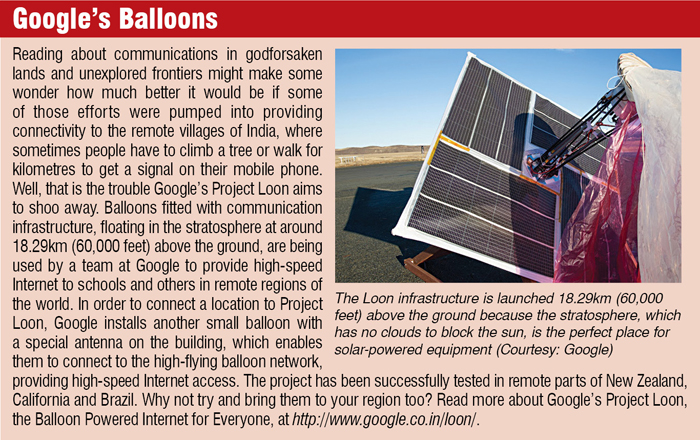 In 2012, 46-year old Simone Moro, master of over 50 mountaineering expeditions, set his mind on conquering Nanga Parbat, known in trekking circles as the ‘Killer Mountain’ under harsh Himalayan winter conditions. Till then, this peak had been impossible to reach in the winters because the difference in height between its summit and the nearest base camp is the largest in the world, and it is notorious for its unpredictable snow storms. What made Moro think he could do it?

Since 12 years before that, he had been using the Thuraya mobile satellite communications equipment with support from Intermatica, and with its help he became the first alpinist to conquer Mount Everest with a satellite phone. He was confident he could reach up Nanga too, with the help of a similar communication system.

His hunch worked. On the journey to Nanga, Moro records having escaped a killer storm. When he contacted the weather forecast centre in Austria with his satellite phone, he was alerted of the incoming storm, which helped him and his partner to outsmart the invincible downpour of snow, and ultimately reach the summit of Nanga Parbat.

For a long time now, satellite phones have been used by defence organisations for coordinating with personnel posted in remote areas. In India too, satellite communication is used mainly by the defence forces. In fact, there is such a great demand on this front that the Telecom Regulatory Authority of India (TRAI) has been pushing the need for Bharat Sanchar Nigam Limited (BSNL) to set up a new gateway for satellite phone services, which will address the rising requirement from security forces.

It is also interesting to note that in September this year, the media reported about the Indian government’s intent to modify policies, allowing tourists to use satellite phones in the Himalayas and other regions of India, including parts of Arunachal Pradesh, where conventional network connectivity is not good. This will provide a further boost for satellite communications in the country.

On the device front too, satellite phones are now much better than they were a few years ago. Modern instruments can withstand extreme temperatures, harsh downpours and even terrible falls. Their communication capability is also much higher.

The complaints people usually have against satellite phones are that they are a bit chunky and also do not offer many value-added services and apps. However, satellite service provider Globalstar has recently offered an interesting service called Sat-Fi, which creates a satellite hotspot for any Wi-Fi enabled device. This can essentially turn any smartphone, tablet or computer into a satellite phone! So, you can enjoy all the conveniences of a smartphone at normal times and resort to satellite-based voice and data connectivity when cellular service is not available in the vicinity.

The coldest corners too
Just as the denseness of the Amazons deters service providers, so does the emptiness of the Arctic, making explorers—and defence organisations—to seek alternate means of communications. As one of the effects of global warming, a lot of sea lanes are getting opened up in the summer, which offers not only more opportunity to explore but security risks as well. In such a situation, better communication is highly essential not just to keep in touch and coordinate with others but also to use/develop maps and such applications. This has made the US Navy and the Coast Guard to explore means to improve the communications architecture there.