AI is a method to turn a computer into a computer-controlled robot or a software-controlled machine that ‘thinks’ wisely, in a manner similar to the way intelligent human beings think. It is done by studying humans—how they think, study, choose and work while trying to resolve a problem—and then by means of the outcomes of this study, developing appropriate software and systems.

AI combines the characteristics of computer science, physiology and philosophy. It creates a machine that is unnaturally bright by following such programs and equipment that are able to take decisions on their own. Researchers are making systems that can emulate the thoughts of human beings, identify their speech and interact with them.

AI is made up of two words: artificial and intelligence.

It is something that is not ordinary, but is made using human skills. It implies creating a replica or simulation of a human brain. Though you can make a machine unnaturally related to human beings, it lacks naturalness and spontaneity.

This means injecting intelligence into a machine so that it can easily carry out the work that would otherwise need a human brain. The machine can make its own decisions, according to the situation. 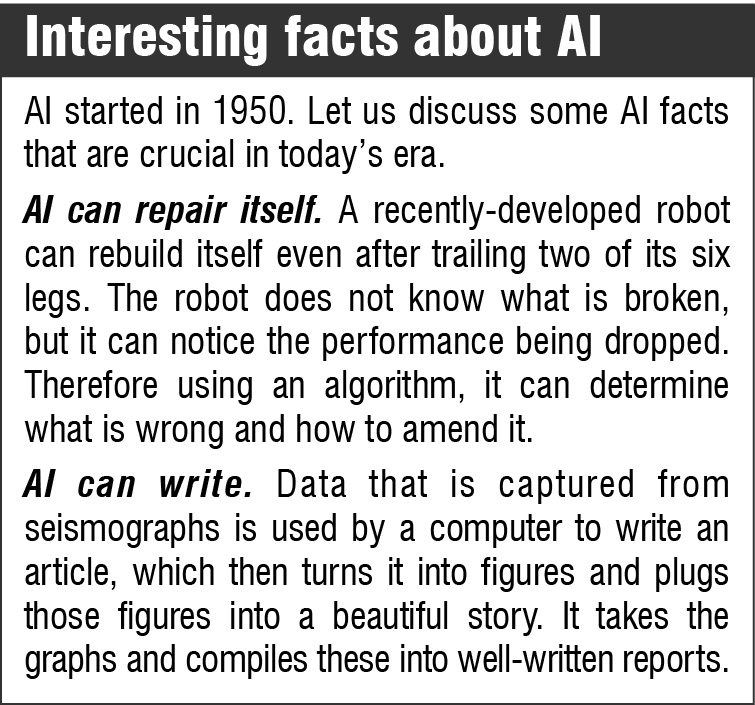 The growth of AI started with the desire of introducing intelligence in machines that was similar to the intelligence in human beings. AI has the following two basic goals:

Systems that exhibit intelligent behaviour and can study, reveal, describe and advise its users.

To make systems that comprehend, think, study and act like human beings.

British mathematician Alan Mathison Turing, known as the father of AI, predicted in the early 1950s that, going ahead machines would perform human acts that even human beings would fail to achieve. He devised Turing Test to test a machine’s ability to exhibit intelligent behaviour equivalent to, or indistinguishable from, that of a human being.

AI has an enormous effect on our daily life, and its power is likely to rise in the coming years. Let us explore some examples of AI that we are using in our day-to-day life.
Transportation. AI has already been granted a licence for driving cars on the roads of California, USA.

Robots can do mundane work like run household errands, supervise routine accounting and reports compiling, manage vehicles and so on. And, now these are capable of creating art, too.

Rocket Fuel, a marketing tool, uses analytical science for adapting and scaling marketing return on investment by means of media and CRM channels. By considering diverse factors and data combinations, the engine bids on the required media and optimises campaigns.

Companies like Google, Facebook and Amazon are investing a lot of money in their R&D devisions, and are buying startups that work in areas like machine learning, natural language and image processing.

A research at Stanford University has concluded that gradually more useful applications of AI, with thoughtful, positive impacts on our culture and economy, are expected to come out soon.

Let us take a look at some of the well-known AI tools.

Examples of AI tools used for businesses are:
1. Gluru helps systematise online documents and emails, and uses AI to get the latest actionable information.
2. x.ai lets AI synchronise schedules and acts as a personal scheduler.
3. CrystalKnows incorporates AI to help you understand the best way to communicate with others.

For developers, some AI tools are:
1. Vicarious helps build the next generation of AI algorithms.
2. Prediction.io has easy-to-employ, open templates for a selection of advanced AI workloads.
3. h2o.ai helps build smarter AI applications that are rapid and scalable.

The main disadvantage of AI is the cost incurred in its protection and repair. All programs have to be efficient enough to suit the changing needs, and machines need to be made smarter.

Some of us have concerns regarding the application of AI, as they feel it is wrong to install AI into a machine so as to make it work for their benefit. Some of the reasons given by them are:

If robots start to substitute human beings in every field, it will ultimately lead to unemployment.

With so much help from machines, if human beings stop using their thinking abilities, these abilities will steadily decline. With AI, they may turn out to be overly dependent on machines, thereby losing their mental capabilities.

If control of the machines goes in wrong hands, it may cause a havoc.

Apart from these, there is the fear of robots overruling humans. Practically, we should be the masters of machines. But if things turn the other way round, clever machines could turn out to be smarter than us.