In addition, omni-directional sensitivity ensures excellent overall performance and versatility in mobile applications. STMicroelectronics MP23AB02B is one such high-quality microphone. 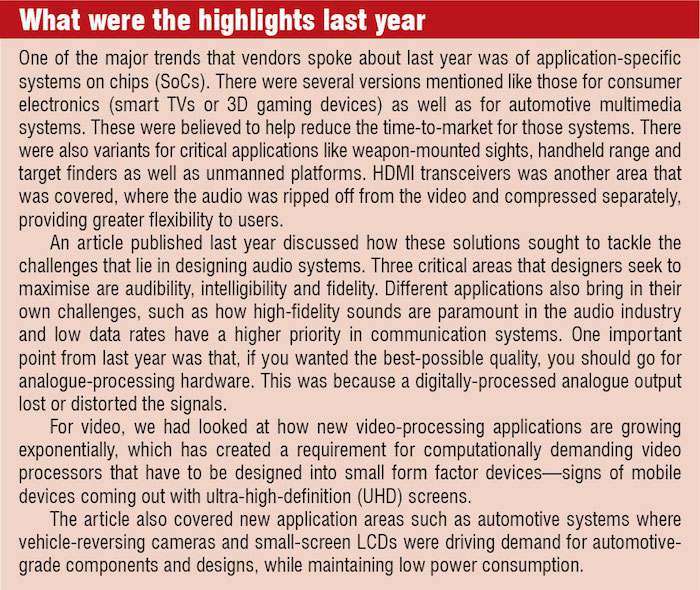 The IoT rears its head
With the Internet of Things (IoT) penetrating almost every aspect of electronic design, whether in the name of the IoT or cyber physical systems, traditional manufacturers seem to be getting the proverbial short end of the stick. “Traditional audio/video device manufacturers, who are experts in their fields, may have difficulty mastering incorporating wireless connectivity and IoT elements in their end products,” says Esmond Wong, vice president – business development and supplier marketing, Arrow Electronics.

So, how are vendors tackling this? Advanced Wi-Fi and streaming solutions deliver CD-quality music to anywhere in the premise without the need of connecting wires. Such technologies reproduce the fullness, clarity and depth of music way beyond Bluetooth A2DP.

In addition to longer ranges; higher bandwidth and stronger immunity to interferences, Wi-Fi technologies coupled with UPnP/DLNA, industry standards for music discovery and sharing enable speakers to stream music from libraries that are typically spreaded across all compatible devices in the local network, such as PCs, tablets, smartphones and network storage devices.

For instance, you have TI’s CC3200 board, which is a microcontroller unit that comes Wi-Fi-certified out of the box. TI has made available audio-booster chips for this board that contain a class D power amplifier to drive the speakers and an ultra-low-power audio codec, TLV320AIC3254, which supports programmable audio processing.

Wi-Fi Direct eliminates the need for each speaker in a zone to connect with the access point, thereby eliminating common problems associated with overloading access points. Bypassing the access point also reduces the radio frequency (RF) bandwidth consumed by half, resulting in increased streaming quality and/or the ability to add more speakers in a zone. The addition of Wi-Fi multimedia (WMM) to Wi-Fi Direct reduces source-to-zone speaker latency and packet loss, resulting in tightly-synchronised audio playback with minimal audio drops.

It is a Wrap
The show goes on, and we will probably see the usual enhancements in audio performance and efficiency next year. There is also a great deal of focus on improving the power efficiency of the chip, while eliminating potential issues with electromagnetic interference, RF interference and audio artefact such as clicks and pops. This year’s single-chip solutions as well as comparatively smaller silicon-handling noise-cancellation techniques have also been interesting.