The Internet of Things (IoT) gives users access to geographically distant places through smart applications running on it. Running these smart applications requires a platform to interface the software with embedded boards. Zerynth Studio is one such powerful integrated development environment (IDE) for embedded programming in Python that enables the IoT.

Zerynth can be used for most of the popular prototyping boards. New hardware boards have been released for Zerynth Studio. As per the application, the Python programming is done in the prototype. This information is sent to the cloud or a database, from where it is controlled and distributed. Once the firmware is designed, it is uploaded for mass programming to suit industrial application. Then, users can operate it smartly using the IoT technology. 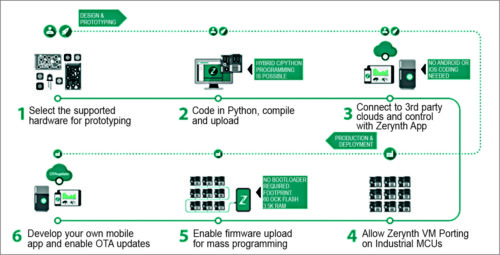 Zerynth IoT, initially known as Viper IoT, is now tailored for the 2.0.5 version. Imagine a user entering his home and without opening the refrigerator, he comes to know about the temperature and condition of food items inside the fridge. The user can also change the temperature of the fridge just through a Zerynth-powered application, called Refrigeration on Internet (ROI), running on his smartphone.

Not only the refrigeration system but also smart lights and their colour can be controlled using an app on smartphones. Zerynth has also come up with the latest LoRa WAN among many more applications. 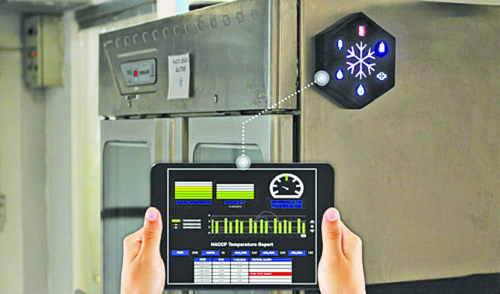 The stack includes tools as per applications, including a virtual machine, Zerynth Studio, advanced device manager and app.

Zerynth Studio is an IDE that runs on Windows, MAC as well as Linux. Using Zerynth Studio programs can be managed through Python 3 or Hybrid C/Python. The user can select the RTOS as per the application in Zerynth Studio.

Zerynth Studio PRO, the professional version of the Studio, enables firmware over-the-air (FOTA) updates, so it becomes easy to keep your solution updated with customer requirements. As updates are made, the rest of the firmware keeps running normally. So the offline time of the device is considerably reduced. The FOTA process can be performed manually by using the components of Studio library.

Also, in version 2.0.5, the App and its library have been clubbed with the advanced device manager. The refreshed App includes push notifications and enhanced graphical user interface.

New hardware supported by Zerynth 2.0.5 include WeMos D1 Mini, SparkFun RedBoard and Atmel SAM D21 xPlained PRO. While SparkFun Photon is a Wi-Fi enabled development platform, WeMos D1 Mini is a small Wi-Fi device for prototyping small smart objects linked to the web. On the other hand, xPlained D21 is an Atmel microcontroller-based device with some upgrades in the board for development of customised designs. 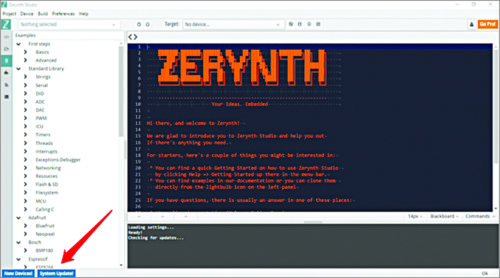 The IDE is easy to handle. It allows you to use any 32-bit microcontroller to design any embedded application for the IoT. It can connect to any cloud infrastructure. So, to create a system on cloud, there is no need to cut, copy, paste or drag from different sources now.

Looking for something else? Check out other software reviews.