Each button is encoded with a unique code. So, by decoding and understanding the code associated with each button, any remote controller can be used for controlling other devices or home appliances. The author’s prototype is shown in Fig. 1.

For decoding, use any TV/DVD IR remote controller. The circuit diagram for the decoding circuit is shown in Fig. 2. It is built around Arduino Uno board (Board1) along with IR sensor TSOP 1738 wired on a breadboard. Pinout of TSOP 1738 is shown in Fig. 3.

VCC, GND and OUT pins of TSOP 1738 are connected to 5V, GND and pin No. 11 of Arduino, respectively. After completing the connections, open Arduino IDE and upload the decoding code (Decode_IR.ino) to the Arduino Uno board. The code consists of a dedicated library for IR operations. Unzip IR+library+for+Arduino.zip folder and place it under Arduino/Libraries folder in Windows computer.

Point IR remote towards TSOP 1738 and press a button on the remote. Open the serial monitor to see the code of each button. The corresponding code will be displayed on the serial monitor whenever a button is pressed. Note down the code and corresponding button name for further use in home automation. Here, we used two keys for switching on and off the appliance, as shown in the table. 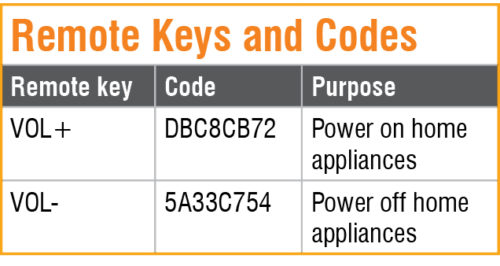 To program, remove ATmega328 microcontroller (MCU) from Arduino Uno. After setting up the connections as shown in Fig. 4, open Arduino IDE, choose Tools->Boards->Arduino Pro Mini and upload home_auto.ino code to Pro Mini board.

In home_auto.ino code, pin 13 of Arduino is declared as output. Codes DBC8CB72 and 5A33C754 are included in this source code. The two keys, Vol+ and Vol-, of the remote controller are used for turning on and turning off output pin 13 of Arduino, respectively. That is, if the code received is DBC8CB72, pin 13 will turn on; if the code received is 5A33C754, pin 13 will turn off. 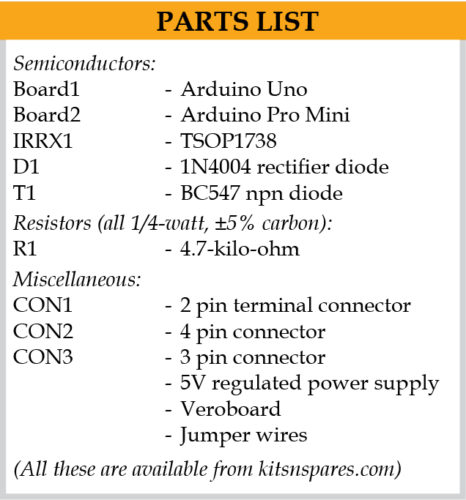 The circuit diagram for home automation is shown in Fig. 5. It is built around Arduino Pro Mini (Board2), IR sensor TSOP1738, NPN transistor BC547 (T1), 5V, single-changeover relay (RL1) and a few other components.

Connect output of TSOP1738 to pin 11 of Pro Mini (Board2). Pin 13 is used as the output pin to turn on and turn off the appliance by pressing Vol+ and Vol- buttons of the remote controller, respectively. So, connect pin 13 to the base of transistor BC547, which energises 5V relay (RL1).

Employ 1N4004 diode to protect the transistor from back emf flow from the relay coil. A three-pin connector (CON3) may be used across relay contacts for connecting AC/DC loads or such appliances as lights and fans.

Shamsudheen Marakkar is pursuing M.Tech in robotics and intelligent systems