This is a circuit for a computerised telegraph which can transmit telegraph messages. The data entered through keyboard is converted into Morse code into computer using the Pascal program. -- PUNERJOT SINGH MANGAT

The circuit given here can be used to send telegraphic messages via computer. The message data entered through the computer keyboard is converted to corresponding Morse code and transmitted via the circuit attached to any IBM compatible computer’s printer port.

Morse code pulses from the computer appearing at pin 3 of the 25-pin parallel port are routed to the base of transistor nT1(CL100) which in turn switches on the audio frequency oscillator built around IC1 (NE555) for the duration of each pulse. The frequency of the oscillator can be varied by adjusting potmeters VR1 (20 kilo-ohm) and VR2 (50 kilo-ohm).

The audio output from pin 3 of IC (NE555) is connected to an FM transmitter comprising transistor T2 (BF194B) and the associated components. The frequency of the transmitter can be changed with the help of trimmer capacitor VC1 or by changing the number of turns of coil L1.

The FM modulated signal is coupled to a short-wire antenna via capacitor C7. The signal can bem received using any readymade FM receiver tuned to the frequency of the transmitter.

As stated earlier, this circuit is connected to the parallel port of the PC. Only pins 3 and 25 of the ‘D’ connector are used. Pin 3 corresponding to data bit D1 of port 378(hex) carries the Morse Code data from the computer to the circuit while pin 25 serves as common ground.

The circuit should be powered by +5 volts regulated power supply. It should be fixed inside a metal box to reduce interference.

The program, written in TURBO PASCAL 7.0, accepts the message via the keyboard, converts it to corresponding Morse code and sends the code to pin 3 of the printer port. The Morse code of various characters appears under the function ‘write(ch)’ of the program where in ‘di’ represents a short duration pulse and ‘da’ represents a long duration pulse. The program is interactive and permits variation of speed. The program can be modified to read and transmit the text files or one can even make a TSR (terminate and-stay-resident) program. 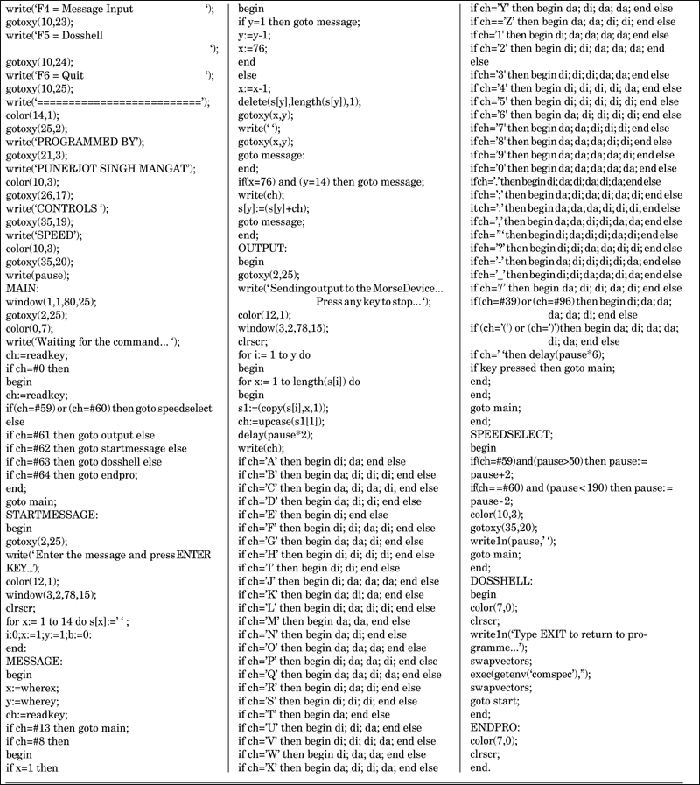 It is hoped that this circuit idea would prove to be of great value to the government’s telecom department, defence services, coast guard, merchant navy and amateur radio operators as well as all those who make use of Morse code for message transmission.