Communication with remotely located automation systems is possible via the Internet. A physical communication port with a network is required for this communication. An Ethernet interface can be used for that purpose. -- By Niranjan Kumar

Ethernet is quite a complex interface, which was difficult to use with small microcontrollers having little memory—until Microchip came up with ENC28J60 Ethernet chip. It is a small chip with only 28 pins that can be used as an Ethernet network interface for any microcontroller equipped with serial peripheral interface (SPI).

Therefore Microchip opens a whole new world of applications like the one we have implemented in this project where real-time readings of temperature and ambient light sensors placed at a remote place can be read using the Internet.

Fig. 1 shows the html page embedded in the source code of the automation system that provides these readings. The html page can be accessed from a remote location. Distance is no longer a limiting factor. Even Wi-Fi connectivity is possible because the devices can be connected to a wireless bridge too.

Circuit and working
Fig. 2 shows the block diagram of the overall automation system. The temperature and light intensity are continuously monitored by two sensors that communicate with the microcontroller unit via I2C protocol. The relay is activated based on the readings from the ambient light sensor. Real-time reading from the sensors and the trigger status, for example the status of temperature, are continuously displayed on the LCD.

The automation system is connected to the router using Ethernet interface. The html page embedded in the code is continuously updated with real-time readings of both the sensors as shown in Fig. 1.

Ethernet interface. The ENC28J60 is a standalone Ethernet controller with an industry-standard SPI interface. It is designed to serve as an Ethernet network interface for any controller equipped with SPI. The ENC28J60 meets all the IEEE 802.3 specifications. It incorporates a number of packet filtering schemes to limit incoming packets. It also provides an internal DMA module for fast data through-put and hardware-assisted checksum calculation, which is used in various network protocols.

Communication with the host controller is implemented via SPI, with clock rates of up to 25 MHz. Two dedicated pins (LED A and LED B) are used for LED link and network activity indication. Fig. 4 shows the simplified connections scheme for easy understanding.

The SPI pins of IC3 are directly interfaced with IC4 as shown in Fig. 4. In the interconnection circuit there is no conversion required from 3.3 V to 5 V because the pins of IC4 are 5V tolerant. 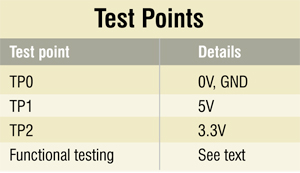 Microcontroller IC3 continuously monitors temperature and light intensity using sensors IC5 and IC6, respectively. Both the sensors communicate to the microcontroller via I2C protocol. Port pins PD0 and PD1 are used to interface both the sensors to the microcontroller. Real-time readings from both the sensors are displayed on LCD1, which is interfaced to IC3 using pins PC4 through PC7 for data pins of LCD1 and pins PC0 through PC2 for control pins of LCD1. Temperature range can be defned in the source code, within which LCD1 displays the message ‘it’s normal temperature’ and green LEDs (LED5 and LED8) glow. If temperature crosses the maximum of the range, the message on the display changes to ‘it’s too hot’ and red LEDs (LED3 and LED6) glow. In case temperature goes below the minimum limit, the message changes to ‘it’s too cold’ and blue LEDs (LED4 and LED7) glow.