Fire is like a double-edged sword. Discovery of fire stands as a milestone in the history of mankind. Fire fighters try their best to fight and extinguish fires when in need. But at the household level, it is observed that if the fire can be extinguished at an early stage, many major accidents can be averted. The aim here is to build a fire extinguishing robot that can help in-case fire breaks out.

This fire extinguishing robot is a prototype (Fig. 1) of the actual one. Sensors used here are simple infrared (IR) photodiodes that detect IR rays coming out of the fire. The sensor board mounted on top of the robot’s chassis is circular in shape so that it gives the robot all-round detection view of 360°. Sensors are equally spaced at 45° each. These act as the eyes of the robot.

In the actual robot, use of fire sensors or IR cameras is recommended. But these are too expensive and hence IR photodiodes have been used as a substitute in the prototype.

The pump used here symbolises the fire extinguishing mechanism, and is used as a substitute in the prototype. Also, the body used is not fire-proof. The actual robot must use fire-proof material for proper and better functioning for efficient results. 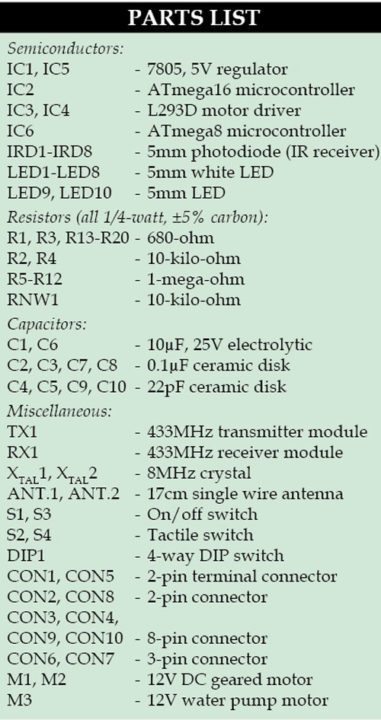 Wavelengths longer than visible and up to 1mm are termed as IR waves. IR radiation can be felt as radiant heat, for example, when you stand in front of a fire.

The light emitted by a burning source comprises IR waves, so by using IR photodiodes as sensors we can detect a fire. This principle has been used in the designing of the sensor board.

A pair of 433MHz RF transmitter-receiver module is used. It allows transmission and reception of serial data without physical connection. The frequency of an RF signal is inversely proportional to the wavelength of the field.

The robot can be made to work in manual as well as in autonomous mode. (Manual mode was tested at EFY Lab.) Different modes of operation are given in Table I. The fire extinguishing robot works in three stages.

Similarly, eight IR photodiodes mounted in a circular fashion on the sensor board help detect the fire; the corresponding LED glows if fire is detected. The cone of detection of the IR photodiode is large, thus decreasing the resolution of the system. This problem can be solved by properly shielding IR photodiodes.

Code to detect the presence of fire using the ADC is as follows: