Nowadays, LED message displays are becoming very popular for transmitting information to large groups of people quickly. These can be used indoors or outdoors, in places such as railway platforms, public transport systems, traffic signals, highway signboards, banks, public offices, hotels, training institutes, nightclubs and shops. Compared to LEDs, liquid-crystal displays (LCDs) are easy to interface with a microcontroller for displaying information as these have many built-in functions, but these can’t be observed from a distance, and large-size LCDs are very costly. 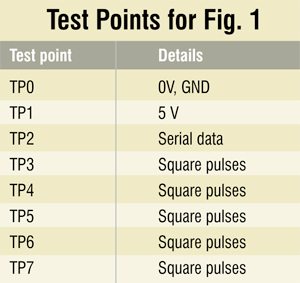 Presented here is a GSM-based, eight-digit dot matrix display that can show an eight-digit message sent via any mobile phone, from any place around the world, to the mobile number of the SIM in the GSM module of the display. Size of the display is 7×40, which is made using 5×7 dot-matrix LED modules.

GSM section. The GSM section comprises a GSM module with a dedicated SIM card inserted and a microcontrolle unit (MCU1). When a new message is received, MCU1 receives the corresponding frame from the GSM module. MCU1 then processes the data received and extracts the message from the complete frame. Once a new message is extracted, the GSM section informs the display section and sends the message via serial interface.

Display section. This section comprises a 7×40 dot-matrix display and a microcontroller unit (MCU2). MCU2 receives the message from MCU1 on serial interface. This message is stored in an array. The message is processed and corresponding serial data are sent to the LED drivers (shift registers) that are connected in the daisy chain.

The 230V AC mains is stepped down by transformer X1 to deliver a secondary output of 12V, 3A. The transformer output is rectified by a full-wave rectifier comprising diodes D1 through D4, filtered by capacitor C12 and regulated by IC12. Capacitor C13 bypasses the ripples present in the regulated supply. The generated 5V is supplied to the complete circuit. LED1 acts as the power indicator and R8 limits the current through LED1.

The microcontroller used in the GSM and display sections is P89V51RD2, which is an 8-bit microcontroller with 64kB Flash and 1024 bytes of data RAM. The P89V51RD2 has three 16-bit timers/counters, programmable watchdog timer, eight interrupt sources with four priority levels, serial peripheral interface (SPI) and enhanced UART, programmable counter array with PWM and capture/compare functions, and four 8-bit input/ output ports (of which three are high current). It also has an on-chip oscillator and clock circuitry, which operates up to 40MHz crystal. It supports 12 clocks per machine cycle (default) and 6 clocks per machine cycle modes, which are selectable via software. The Flash program memory supports both parallel programming and serial insystem programming (ISP).

Microcontroller IC10 is interfaced to the GSM module using MAX232 driver. The GSM module is a specialised type of modem that accepts a SIM card and operates on the subscriber’s mobile number over a network, just like a cellular phone. Basically, SIM300 is a triband GSM/GPRS engine that works on EGSM 900MHz, DCS 1800MHz and PCS 1900MHz frequencies. GSM modem is RS232-logic-level compatible. Here MAX232 is used to convert TTL into RS232 logic level and vice versa.

Combination of resistor R7 and capacitor C4 provides the power-on reset for microcontroller IC10. Switch S2 is used for manual reset. An 11.0592MHz crystal (XTAL2) along with two 33pF capacitors provides the basic clock frequency. Microcontroller IC10 receives a frame corresponding to every new valid message received by the GSM module. This frame is further processed and the message extracted out of it. Thereafter, an acknowledgment is sent through port pin 1.0 to the display section indicating that a new message will be transmitted.