Mobile phone ring tones sound like real audio recordings. It’s not because of the way the melodies are composed, but the protocol behind playing the melody. The ring tone text transfer language (RTTTL) is behind those wonderful lullabies and songs you have on your mobile phone.

Basically, a ring tone is the sound made by a mobile phone to indicate an incoming call or text message. Here we present a microcontroller-based ring tone generator.

A cylindrical air column with both ends open vibrates with a fundamental frequency. Each end of the column must be an antinode, with one node at the centre for the air motion. Therefore if ‘λ’ is the wavelength of the sound produced by an open cylindrical air column, its length ‘L1’ will be:

If length is half, then:

Thus halving the length doubles the frequency, i.e., frequency n1 is created with one octave higher (2n1). If the length is made quarter of the original, the frequency becomes 4n1, i.e., two octaves higher.

In music, frequency n1 is called a note. The pitch of a piano key or guitar string is described by the note.

According to Nokia RTTTL specifications, note A with octave 5 has a frequency of 440 Hz (refer Table I): 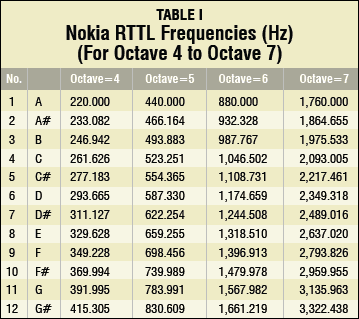 RTTTL is a simple text-based format that you can use to create ring tones. An RTTTL file is made up of a single string divided into three sections separated by colons (:).

In the example of a Happy Birthday song given below:

1. The first section is the name of the RTTTL melody, i.e., ‘Happy Birthday Song.’

2. The second section defines the default values for the file. There are three categories of default values: duration (d=4), octave (o=5) and beat per minute (b=125).

3. The third section describes the melody.

It is a set of notes separated by a comma. The notes are given in the following format:

where ‘dn’ is the duration of the present note.

If either the duration (dn) or octave is not specified for a particular note, the default values are assumed.

After getting the notes, you must calculate the duration for which a note is to be played:

So to play music, all you need to do is to get the RTTTL ring tone of the particular music, then read its note and generate the frequency for the calculated duration (D).