Traditional switches are outdated now. These switches have mechanical moving parts that get damaged on continuous use.

This smart touch panel project will turn out to be much cheaper than the panels available in the market. The panel can be used to control electrical appliances either through Arduino based touch switchboard or wirelessly through an Android app. Arduino based touch switchboard can also display room temperature on the smart touch panel screen (refer Fig. 1).

Now, let’s collect the components listed in Table 1 to start the project. TFT touch display shield (6cm) used in this project is shown in Fig. 2. 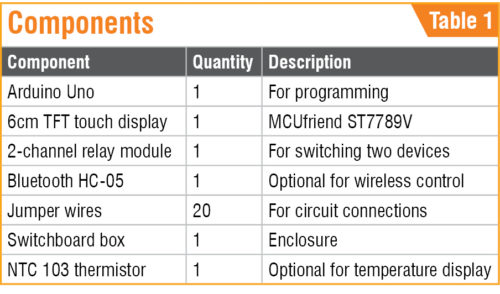 First of all, install the required libraries in Arduino IDE. For this, go to the Sketch menu and click on Manage libraries option (Fig. 3). Then search the library name and click on the install button. The libraries needed for this project are Adafruit GFX, TouchScreen, and NTC thermistor. Install them, as shown in Fig. 4, Fig. 5, and Fig. 6. Every touchscreen has its own library. Here, we have used MCUFriend 6cm TFT LCD Library ST7789V.

In the first part of the code, initialise the required libraries, as shown in Fig. 7.

Create a function to get the point of touch on the LCD screen in X and Y coordinates (Fig. 8).

Next, add codes for colours that we are going to use in the display (refer Fig. 9).

Then create a setup function where we will add codes to show buttons and all other elements on display (refer Figs. 10 and 11).

We need to create another function to check the state of buttons and assign their tasks.

For example, if we touch a button, the assigned task changes the state of the relay to either on or off (refer Figs. 12 and 13).

We are done with the coding part. Save the code as touch_switch.ino. Compile it and upload the code into the Arduino Uno board. The next step is app development.

App development is done on the MIT App Inventor. First, you need to have a valid Google email account. Next, open the link https://appinventor.mit.edu to start the MIT App Inventor project. You will find two tabs—Designer and Blocks on the top right side of the screen.

Open the Designer section, create a layout for the app, and then add the following components—four buttons, a list picker, and a Bluetooth client, as shown in Fig. 14.

Next, open the Blocks section in MIT App Inventor. Pick and place the code blocks, as shown in Fig. 15. Save the project as TouchSwitch.apk and install this .apk file on your Android phone. 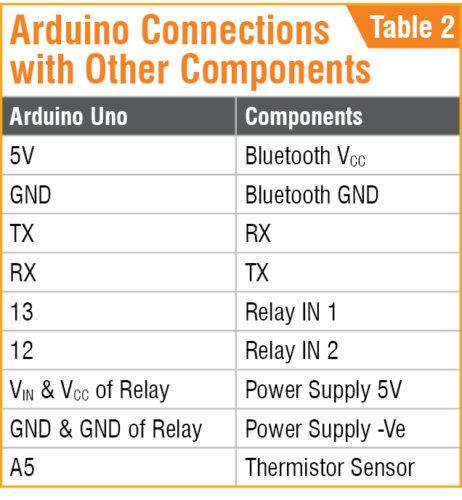 Congratulations! Your smart touch switchboard is ready to use.

Check each connection carefully as one wrong connection might result in an electrical short circuit. When you are sure that all the connections are correct, power on Arduino and relay module with 5V DC, and then plug AC appliances connected to the relay for switching.

This project was first published online on 15 April 2020 and was published in EFY August 2020 print issue. You can read the full article here.