The most essential tool for engineers is a logic analyzer, which they operate using a laptop or PC to show the results. As stand-alone logic analyzer with a display can cost you around 10 thousand rupees or more. So, today we will design a low-cost logic analyzer that has its own stand-alone display that is portable and can be carried in the pocket. Hence, do your design and use this tool without worrying about the laptop or PC for viewing the data. The device can be designed by configuring the following components.

Note: The display part is optional and attachable like an accessory. Hence, if you want to remove the display, then the ESP is itself a logic analyzer, and further, to check real-time data on a PC, install the Sigrok. It will cost you only INR 350 if you detach the display.

Now we can code the logic analyzer. Open the Arduino IDE and then select the ESP logic analyzer example code. Now in the code, we can set up frequency, baud rate, and other configurations.

Now we need to select the right port number and the right ESP8266 board and upload the code.

Now connect the FTDI and channel GPI as follows. The Logic analyzer channel GPIO are 13 to 16 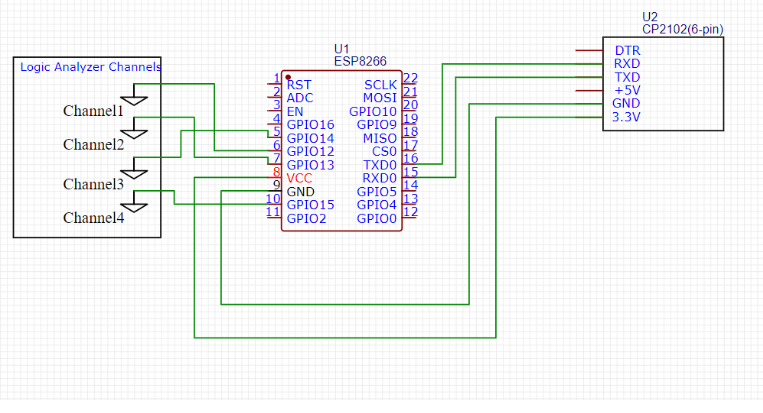 Now our logic analyzer is ready, but our device can capture the logic data using GPIO pins, which act as a channel for the logic analyzer, but we can’t view it without any software, so if you have a PC or laptop, then install the Sigrok using the following link.

Now open the Sigrok Pulseview and then go to connect and select the Open Bench logic snipper. Now, select the serial port and baud rate and then scan for the device. After scanning, you will receive the name of the logic analyzer device. The name used for this device is the ESP board. It shows ARDUINO ESP with 8 channels. Select it, and now your 4 channel logic analyzer is ready.

Now the device is ready, power the raspberry pi with 5V and insert the ESP USB into the Raspberry Pi. Now, open the Pulseview and select the ESP device, and connect it as a logic analyzer. The ESP pins can be used as a channel for the logic analyzer; connect it to the pins for doing signal analysis. The signal analysis can be seen on the display connected.