This project demonstrates how you can build a real-time clock (RTC) with a temperature display using Arduino, DS3231 RTC chip, and SSD1306 OLED display (128×64 pixel).

DS3231 RTC chip is more accurate than DS1307 and also has a built-in temperature sensor. It keeps the time running even when the main power source is down. It uses the I2C interface to communicate with the master device (microcontroller), in this case the Arduino.

OLED (organic light-emitting diode) is a flat light emitting device developed with organic thin films that are connected in series between two electric conductors. The OLED display used in this project is shown in Fig. 4. It has improved image quality, full viewing angle, high brightness, better contrast, wide colour range, and low power consumption. It is more efficient and reliable as compared to a simple LCD display.

It is mainly used in such digital display devices as computer monitors, mobile phones, hand-held video games, and television screens. It is easily available in the market as well as online stores.

The display module connects to Arduino using four wires—two for power and another two for data— making the wiring very simple. The data connection is based on the I2C (inter-integrated circuit) interface, which is also known as TWI (two wire interface).

The DS3231 module is a low-cost, highly accurate real-time clock that can maintain time in hours, minutes, and seconds as well as the day, month, and year information. It has automatic compensation for leap years for and months with less than 31 days.

The module can work on either 3.3V or 5V, which makes it suitable for many development platforms or microcontrollers. The battery input is 3V, and a typical CR2032 3V battery can power the module and maintain the information for more than a year. The DS3231 module (front and back) used in this project is shown in Fig. 5.

The heart of the project is the Arduino Uno R3 board, which is based on ATmega328/ATmega328P microcontroller. It has 14 digital input/output (I/O) pins, six analogue inputs, 32k flash memory, 16MHz crystal oscillator, USB connection, a power jack, an ICSP header, a reset button, among others. It can be programmed using Arduino IDE software.

After making all the connections, test the working of the circuit by pressing the mode button (S2), and then release it. The cursor on display will flash on the day-of-week field. Press and hold the set button (S1) to advance the day of the week to the next day at 5Hz rate, or do a short press to advance to the next setting.

Note that the RTC chip knows the correct number of days in each month. Press and release the S2 button to advance the cursor to the year field. Press and hold the S1 button to scroll through the years quickly, or do a short press to advance to the next setting. Valid ranges are 2000 to 2099. The RTC chip keeps track of leap years automatically. When you first power up the clock, the date will be January 1, 1900. Just advance the year to the correct value.

Thus, it gives time, date, and year along with temperature readings (refer Fig. 6).

Circuit operation is controlled by the software program (main_code.ino) loaded into the internal memory of Arduino Uno. The program implements all the required functionalities.

The program/sketch is written in the Arduino programming language. Arduino IDE version 1.8.11 is used to compile and upload the program to the Arduino board. 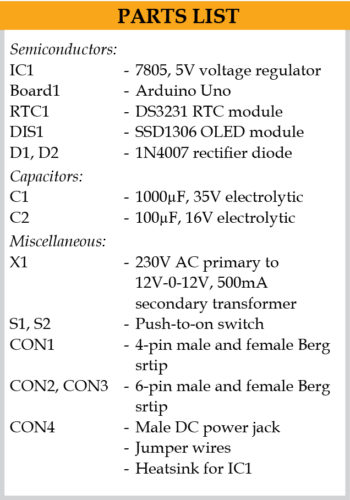 In this project, the following header files are required in the main_code.ino for programming:

#include <wire.h>. This header file is especially required for I2C protocol devices for faster communication. In this project, the two I2C devices are SSD1306 OLED display and DS3231 RTC module. (This header file is already included in the latest Arduino IDE.)

The Arduino code (main_code.ino) requires two external libraries: Adafruit-GFX-Library-master.zip and Adafruit_SSD1306-master.zip. You need to include them in Arduino IDE before compiling and uploading the code to the Arduino board.

A PCB layout for Arduino real-time clock with temperature display is shown in Fig. 7 and its components layout in Fig. 8.

After assembling the circuit on the PCB, connect Arduino Uno pins to PCB using jumper wires. Do not forget to upload the source code into the Arduino Uno board before wiring. The circuit works with 230V AC mains using the transformer (X1), as shown in the circuit.