This project is built around an MRF24WBOMA Wi-Fi module, a PIC microcontroller and a camera module using the TCP-IP protocol. The camera captures live video from a remote location, which is transmitted wirelessly through the Internet and can be viewed on a PC or laptop.

The circuit diagram for MRF24WBOMA-based Wi-Fi embedded webcam is shown in Fig. 3.

As shown in the block diagram (Fig. 2), the power supply for the circuit includes 9V AC, a rectifier, a 7805 fixed regulator and an LM317 adjustable regulator. This supply drives the main circuit, which includes the Wi-Fi module, the 74HCT125 buffer, the PIC microcontroller and the MAX232 driver.

The 9V derived from transformer X1 is rectified by retifier module BR1, filtered by capacitor C1 and given to 7805 IC, which is a fixed 5V regulator. The LM317 adjustable regulator is configured to give a fixed 3.2V meant for the MRF24WBOMA Wi-Fi module. LED1 indicates the presence of power in the circuit.

The MRF24WBOMA is a low-power, 2.4GHz, IEEE Std. 802.11-compliant, surface mount module with all associated RF components—crystal oscillator, by-pass and bias passives with integrated MAC, baseband, RF and power amplifier, an built-in hardware support for AES and TKIP. The MRF24WBOMA module is approved for use with the integrated PCB meander antenna. The PCB antenna is fabricated on the top copper layer and covered with solder mask. 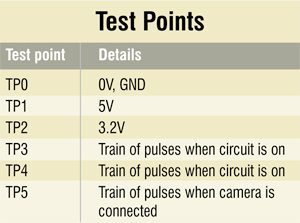 The module interfaces to the PIC microcontroller via a serial slave SPI interface for interrupt, hibernate, reset, power and ground signals. The module normally runs on a single supply voltage of 3.3V, though here we have used a 3.2V supply. It also supports optional JTAG and serial debug for testing. The debug port operates at 3.3V and requires a level shifter for operation with RS232 devices.

The MRF24WBOMA module is designed for use with Microchip’s TCP/IP software stack. The software stack has an integrated driver that implements the API, which is used in the module for command and control, and for management data packet traffic. Other details of TCP/IP stack can be found from its data sheet.

74HCT125 has quadruple bus buffer gates with 3-stage outputs. These gates feature independent line drivers with 3-state outputs. Each output is disabled when the associated output-enable (OE) input is high. To ensure the high-impedance state during power up or power down, OE should be tied to Vcc supply through a pull-up resistor; whose minimum value is determined by current-sinking capability of the driver. The 74HCT125 has been used here as a level-shift interface.

Microcontroller. PIC18F4620 microcontroller, the heart of this project, has features that significantly reduce power consumption during operation. The key features are alternate run modes and multiple idle modes. The SDO and CS pins of Wi-Fi module are connected to microcontroller through the 74HCT125 buffer.

Microchip’s PIC18F4620 was selected because it is low-cost and has sufficient memory for coding—64k Flash memory and 4k RAM. It is available in 40-pin DIP package and has a hardware SPI bus. The code has been written using C18 compiler to fit within the memory of PIC18F4620.

16×2 LCD module has been used to display the IP address and for debugging the project. It is operated in 4-line mode. Port pins RE0, RE1 and RE2 of the microcontroller are connected to RS, R/W and EN control pins of the LCD, respectively. Port pins RD0, RD1, RD2 and RD3 of the microcontroller are connected to D4, D5, D6 and D7 of the LCD, respectively. Preset VR1 is used to control the contrast of the LCD.

A typical driver output voltage swing is ±8V when loaded with a nominal 5-kilo-ohm RS232 receiver and VCC = +5V. Output swing is guaranteed to meet the EIA/TIA-232E and V.28 specifications.

Several camera modules are available in the market. For 5V operation, we chose microCAM (uCAM) serial JPEG camera from 4D Systems (www.4dsystems.com.au) instead of a USB camera to avoid driver-related issues.

The camera is connected to PIC microcontroller through 9-pin DB9 and RS232 level shifter (MAX232). uCAM is a highly integrated serial camera module, which can be attached to any host system that requires a video camera or a JPEG compressed still camera for embedded imaging applications. uCAM comes in a compact form factor with a built-in lens and a 4-wire connector (for 5V, GND, TX and RX) that provides easy access to both power and serial data. It is compatible with C328 JPEG camera. The uCAM used in this project is shown in Fig. 5. You need to connect 5V supply to this camera.

SPI communication with MRF24WBOMA is illustrated in Fig. 6. PIC microcontroller is chosen as master and Wi-Fi as slave. FOSC/64 clock mode is chosen by proper setting of SSPCON1 register of PIC18F4620.

Software for the PIC microcontroller is written in ‘C’ language and compiled using MPLAB IDE. The program flowchart is shown in Fig. 7.

The project is based on communication between the Wi-Fi module, microcontroller, PC and the camera, which are closely controlled through the software. When LED2 starts blinking it indicates that stacking is running and communication is successfully established with remote client PC. This LED2 monitored through timer interrupt is defined in main.c file.

Before writing the code note that 10MHz crystal is used as oscillator source and the clock is set at 40 MHz using HSPLL fuse setting through software.

Below some important source program routines used in this project are explained.

After SPI initialisation, Wi-Fi should be initialised for proper network protocol transmission.

Wi-Fi initialisation and other relevant codes are included in the WFMac.c file. The rouines listed below are implemented only after understanding the coding in Microchip TCP-IP Stack.

WF_Init routine is given below:

RAWInit() routine is given below:

The camera should be first connected to PIC microcontroller via serial port. The baud rate can be 14400, 56000, 57600 or 115200, though better synchronisation was obtained at baud rate 56000 during testing. The camera is assigned with dynamic IP address, which is assigned by DHCP client routine rather than fixed IP address. The advantage is that the IP address gets assigned automatically as per local network and we need not assign it manually. DHCP client routine associated with UDP protocol does the necessary task for auto configuration of the IP address.

The camera should be synchronised by issuing sync command until it acknowledges c328syn() routine, which is part of the IP.c file, as listed below. After taking pictures, suitable reset command is issued to camera module for taking fresh pictures. The Reset() routine is also included in the IP.c file for the same.

The sync command is sent as given below: 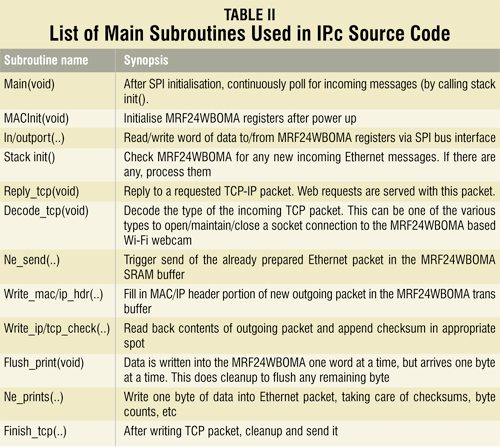 The list of main subroutines used in the IP.c source code is given in Table II.

single-side PCB layout of the Wi-Fi embedded system is given in Fig. 8 and its component layout in Fig. 9.

Note that, since the processor speed is limited to 40 MHz, we cannot increase camera speed baud rate beyond 57600. Hence we cannot display a smooth live video. You can click ‘switch-off’ button to close the captured image.

By careful PORT forwarding of wireless router to local IP address, appliances can be controlled through the webcam from any place in the world. Besides, by using high-speed ARM processors we can increase the camera’s baud rate and thereby display live pictures smoothly by using AJAX in webpage design.

Monitoring of parameters such as temperature, pressure, voltage and current can be done via the Internet from anywhere in the world by connecting suitable sensors to input port of the microcontroller. Since PIC18F4620 has limited memory space, this feature was not included in this article.