The unknown location of sewage collection pipes in most instances makes it difficult to prevent sewage leaks and the resulting catastrophic damage. 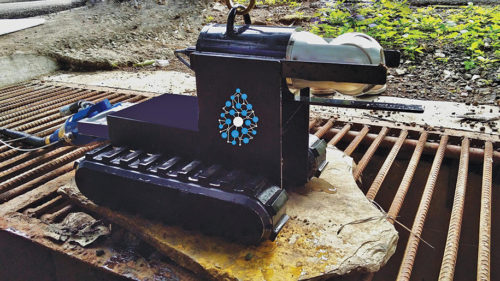 Fluid Robotics uses a robotic system to map and inspect underground pipelines that have a minimum diameter of 15cm. The platform is being used to digitise pipeline data in several cities, buildings and roads to understand the impact of structural defects or deposits on the pipelines, their age and capacity, following international standards.

Surveys using this technology have also been conducted in storm-water drains, sewers and water pipelines near rivers and lakes. This provides solutions for the interception and diversion of untreated waste water from the storm drains into existing sewers. The data gathered and analysed helps prevent water leakages, sanitary sewer overflows and monsoon flooding.

The system creates high-resolution maps of less than 5cm using advanced unmanned aerial vehicles. These maps include high-resolution contours along with accurate mapping of buildings, pipelines, roads, bridges and all other infrastructure in the project area. It captures and analyses the image and sensor data using magnetic, ultrasonic and pressure sensors for projects in irrigation, oil, gas, transportation, sewers and water pipelines.

Governments and major industries are becoming concerned about water-quality monitoring and usage. They want to measure the levels of pollutants that may enter waterways as a result of various issues. The robotic inspection data, together with hydraulic modelling of sewer lines and storm drains, is used to accurately calculate pipeline capacities. This has helped government organisations and infrastructure consultants in designing sewer pipelines, interceptor drains as well as sewage treatment plants.