The multi-million-pound project is actually deeper than it appears to be. It will involve not just advanced research in drones and robotics, but also include development of advanced simulators like airflow simulators to study air pollution, tackle the problem of aging water pipelines and more. The project will also study the environmental and social impact of having a robot workforce always on duty in the city, trying to achieve the task with minimal disturbance to the city’s dwellers.

A trick or two learnt from flies and birds
Think small, flying, fast and agile, and insects are the first creatures that come to mind. How challenging it is to vanquish a fly that irritatingly hovers around you, buzzing into your ears! So close by, yet so tough to swat. Well, it is no surprise then that with similar goals, drone researchers are turning to nature for inspiration. 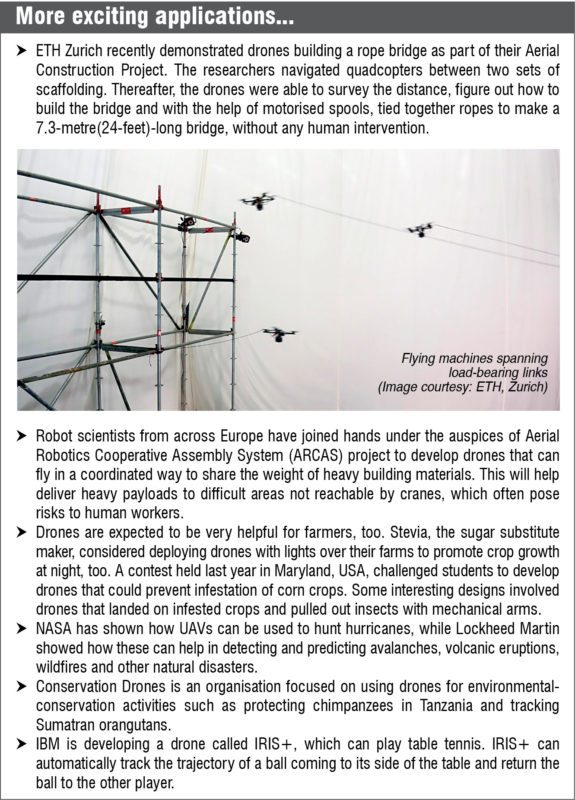 Insects are able to fly swiftly in and out of even the trickiest of spaces without colliding into anything. This is a capability that UAVs must have, if these are to work autonomously and coexist with humans. One way to achieve this would be to equip the drones with digital cameras that capture a 360-degree image of what is around them. However, this goes against the form factor and weight requirements, which are critical for drones.

So scientists at Swiss Federal Institute of Technology (ETH) Zurich, Switzerland, have now developed an insect-inspired motion sensor for UAVs. The artificial eye measures just two cubic millimetres and weighs just two milligrams. It features a lens on top of all three electronic photodetectors in a triangular pattern. The device combines the measurements of these photodetectors to determine the speed and direction of any motion in its field-of-view. This is similar to how the segmented eyes of insects capture their environment to avoid obstacles.

The team has also developed algorithms to process signals from these devices, which will be programmed into onboard chips to compute relevant parameters like distance to objects, time until potential collision and so on.

The artificial eye has been tested under varied conditions like poorly-lit rooms, bright and sunny outdoor spots, and it seems poised to outdo the original itself, as results show that it is able to detect motion three times faster than actual flying insects.