Autonomy is a matter of perception
If drones are to be really useful, delivering parcels, spying enemy territories, entering danger zones ahead of fire-fighters and first-responders, and more, these need to be aware of their environment and capable of flying autonomously. Drone makers across the world are investing efforts in this direction. 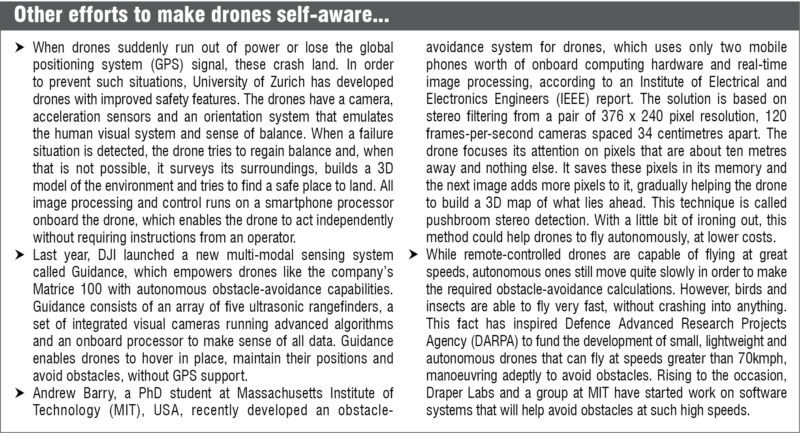 Ascending Technologies, for example, has been working with Intel to develop solutions for obstacle avoidance. Intel’s RealSense 360-degree-depth camera module, which is less than four millimetre thick, weighing around eight grams, has been effectively combined with powerful microprocessors and smart algorithms to improve the perception capabilities of drones without affecting payload and flight times.

AscTec FireFly, for example, uses Intel cameras to auto-fly through forests without crashing into trees. AscTec Neo, a research UAV, which will be available in 2016, will have a more advanced sensor ring with six Intel RealSense cameras, which will give it a 360-degree view essential for autonomous navigation.

Soon, this scene might be more real than you think. One of the biggest worries on the minds of authorities and people is the risk of drones interfering with public routine. Imagine drones disturbing the flying of real aircraft, bumping into people, crashing on windscreens of cars and so on.

While companies are trying to make drones more self-aware and safe, organisations like FAA are trying to control the flight of these little electronic birds to avoid any mishaps. FAA is taking several steps in this direction, declaring no-fly zones, putting a bar on the height within which drones can be flown, prohibiting the use of drones near airports, checking and controlling commercial usage of drones and so on.

To aid FAA in this potentially-mammoth task, NASA is developing a drone-traffic-management system that can track thousands of drones, evaluate their flight plans and control where these can or cannot go. The project involves four phases, of which the first phase is almost ready for testing by FAA. The system will use geo-fencing to prevent drones from going where these do not belong.

In a recent media report, Parimal Kopardekar, NASA’s principal investigator for drone traffic management, explained that there are two types of geo-fences; one is a no-fly-zone type, where you should not go inside the geo-fence. This will be used to keep drones away from airports, for example. The other kind of geo-fence would keep drones from getting out.

The system will enable users to file flight plans, which will be evaluated and accepted or rejected if these do not work out. Ideally, the system will also enable anybody to simply point a smartphone at a drone flying in the vicinity and find out what it is up to. This is very important to instil confidence in people and avert the risk of spying drones.

When you actually point your phone at a drone, the answer could be quite surprising, because drones are up to a lot of things today. Drones with follow-me capabilities can track players and shoot videos that will help them improve their playing.

Drones can plant seeds on high mountains and dangerous forests to improve the green cover. These can monitor farms and improve watering cycles. And well, Amazon hopes these can deliver parcels, too.

However, it is evident from the kind of research happening across the world that this is still far away. It took a long time for robots to start working cooperatively with people. So you can imagine how long it might take before drones start flying safely in the midst of people, cars, buildings and all the chaos of our cities!