Do Space Rovers Promise A Better Future For Space Technology?

In the rapidly transforming technological world, India is currently focusing its attention on emerging technologies. Though not by design, space rover technology is still an emerging sector in India.

A space rover is sometimes called a planetary rover. It is a space exploration vehicle designed to move along the surface of a planet or other celestial body. Some space rovers are autonomous robots.

Rovers are usually sent to a planet using a lander-style spacecraft. These are used to gather various information about the planet or take samples and/or pictures. These help in the exploration of the universe.

With abundant technologies, space also offers opportunities for rover technology. Space rovers are increasingly being seen in the field of space technology. These are becoming essential for space exploration because of better service compared to satellites. Today, rovers contain several instruments for overall improvements in exploration and findings in planets, sub-planets and other celestial bodies.

A rover contains the following parts:

Various lunar rover missions that have so far taken place are given in the table below. 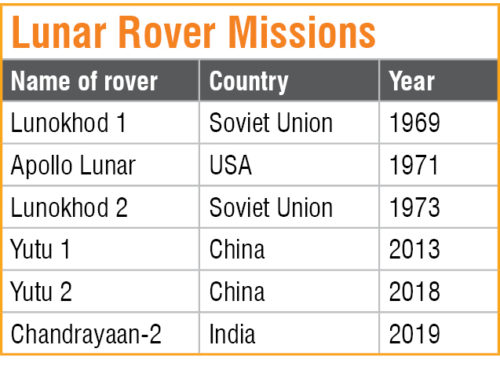 Without vision, no space programme can exist. China launched its rover Yutu 2 on December 7, 2018, from Xichang launch station. It successfully landed on Von Karman Crater. China’s far-side moon rover is busy exploring its exotic new home. A part of Yutu 2 Chang ‘e 4 mission—in Chinese mythology, Chang ‘e 4 is a moon goddess and Yutu or Jade Rabbit is her pet—Yutu 2 is a six-wheeled rover, and is likely to cover 2500 kilometres of the south pole of moon Aitken Basin. Yutu 2 houses four scientific instruments that will be used to study the surrounding dirt and rocks, and to probe the far side’s sub-surfaces. Such observations could help scientists better understand the moon’s composition, structure and evolution.

Yutu 2 is carrying a radioscope, which is equipped with a thermo-electric generator in which radioactive substance is present, which is converted into electricity. Quequioa (Mas Pie Bridge) is a satellite rotating around the moon, and relaying data and commands from Yutu 2 to Earth.

In the rapidly transforming technological world, India is currently focusing its attention on emerging technologies. Though not by design, space rover technology is still an emerging sector in India.

Economic reforms like Make in India and startups from various sectors have done wonders in terms of productivity, consumer welfare and more. This includes the Indian space sector as well.

India’s Chandrayaan-2 was scheduled for October 2018, but got postponed to 2019. The average-sized, indigeneously-developed Indian rover started giving trouble with re-throttling in lander parts. This was due to problems with thrusters. Previously, GSLV II was proposed to ferry Chandrayaan-2.

Proper utilisation of rover technology will help provide better opportunities to explore Mars as well. Geographical exploration including study of mineral compositions, and environmental studies such as temperature and pressure (particularly wind) are some important studies to be made by rovers. Such findings may act as key instruments for landing on Mars.

Six rovers have been sent to Mars so far, of which four projects have been successful. Mars2 was sent in 1971, and its landing failed while taking Prop-M with it. Mars3, sent in 1971, stopped communicating after about twenty seconds after landing, making the mission a failure.

Sojourner rover landed successfully on July 4, 1997. However, communications from it were stopped on September 27, 1997. Spirit Mars Exploration device-A (MER-A), launched on June 10, 2003, landed on Mars on January 4, 2004. It worked for nearly six years and travelled through 7.73 kilometres.

Opportunity Mars Exploration device-B (MER-B) was launched on July 7, 2003, and landed on Mars on January 25, 2004. It covered a total distance of 40.25 kilometres. On 2018, it stopped functioning when Mars dust-storms blocked the sunlight needed to recharge its batteries.

Curiosity rover was launched by NASA on November 26, 2011. It landed on Gake Crater on August 6, 2012. It is still operational.

Improved experiments by Curiosity. On November 26, 2011, NASA sent Curiosity rover to Mars. Examination of loose rocks, sand and dust by Curiosity has provided great understandings about local and global soil details of the red planet. A key finding of Curiosity is that, water molecules on Mars are bound to fine-grained soil particles at Gale Crater, where it landed. Findings about both crystalline and non-crystalline components in soil provide information about the planet’s volcanic history.

Curiosity is 3.05m (10-feet) long, 2.74m (9-feet) wide and 2.13m (7-feet) tall, and its arm reaches 2.13m (7 feet). It weighs 900 kilograms. It has many cameras, rock vapouriser (laser-operated), rocker-bogie suspension and geology laboratory. The main mission of Curiosity was to find whether Mars can support small life forms called microbes. Curiosity was designed to travel up to 200 metres per day as it explored Mars.

Mars exploration rover (MER) charge-coupled device (CCD) sensors are mounted on it at two different types of cameras. These are hazard avoidance cameras (hazcams) and navigation cameras (navcams). Together these work to provide a complementary and comprehensive view of the terrain. Eight black-and-white hazcams are mounted on the lower portion of the front and back of the rover.

On March 2018, Curiosity celebrated 2000 days on Mars, making its travel from Gale Crater to Aeolis Mons. During the travel, it examined geological information embedded in mountains’ layers, and found evidence of past water and geological change.

NASA’s deep space network (DSN) is an international network of antennae that provides communication links between scientists and engineers and rovers on Mars. The DSN consists of three deep space communication facilities placed approximately 120-degrees apart around the world at Gold Stone in California’s Mojave Desert, Real Madrid Spain and near Canberra, Australia.

Curiosity has its own curiosities. One of them is its laser detection system that works with new artificial intelligence (AI)-based AEGIS algorithm, which took ten years to build and test.

Hardware-based features of rovers such as sensors, cameras, spectrometers and detectors should be strong and tamper-proof to face such hazardous elements as wind, storm, radiation, temperature, pressure, etc, so that uninterrupted data can be transmitted and collected by these devices and sent to Earth. Memories and processing capacities of brain (computer) of the rover should be strong, too.

Scientists and engineers are accepting rovers as the most essential part in planet exploration with more features and updated processes. More functionality can be added to rovers and correctly implemented. The present challenging task for researchers is to add nanotechnology, AI, Big Data, robotics, improved computer vision and other recent technologies to rovers to make them more sophisticated so that these gather better information required to make space life possible for humans.

Currently, landing of humans on Mars is the biggest challenge before scientists. NASA has been working on what it calls a Mars rover concept vehicle. It is a human-driven rover. NASA is hopeful of making astronauts land on Mars along with the rover by 2030.

Vinayak Ramachandra Adkoli is BE in industrial production. He has been a lecturer in mechanical department for ten years, in three different polytechnics. He is also a freelance writer and cartoonist.