Lantos 3D digital ear scanner is apparently the world’s first inra-aural 3D scanning system. The small handheld device produces a 3D image of the patient’s ear canal. Rather than providing a fxed image, it shows the changes that take place in the shape of the canal as the patient moves or swallows, and a lot of other data about the ear canal wall that manufacturers can use to improve the fit and design of in-ear devices. It can also beused by hearing device makers to understand the human ear better. Lantos’ device is likely to be available commercially sometime this year. 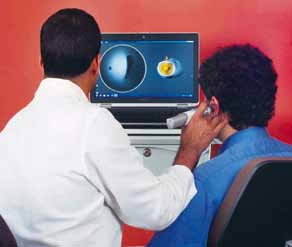 The Lantos scanner is based on a new technology called ‘emission re-absorption laser-induced fluorescence’(ERLIF), developed by Dr Douglas Hart at the Massachusetts Institute of Technology. Using the intensity measurement of two different wavelength bands of fluorescent light as they travel through an absorbing medium, ERLIF generates a highly-accurate 3D map. The medium selectively absorbs one wavelength band over the other. Thus the intensity ratio of the two wavelengths as they travel through the medium can be measured using a standard camera.

Turn your iPhone into a bike trainer

Wahoo Fitness’ KICKR is a super trainer for cyclists. Using an application running on your iPhone and the wireless-enabled power trainer device, you can stay indoors and practice as if you were on the ground. The KICKR power trainer allows cyclists and triathletes to set the resistance and ride the bike while accurately measuring power, heart rate, speed and other parameters. Users can increase or decrease the resistance and simulate real-world conditions. They can also structure interval workouts. These adjustments occur almost instantaneously, so the user can go from gradients to flatland, and then steep slopes again, almost immediately. An application called Kinomap also lets you choose from various cycling tracks and eco-locations, to simulate the environment automatically. 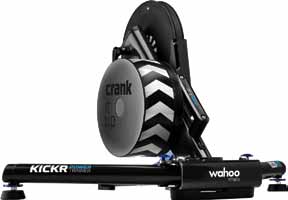 Inside: KICKR power trainer uses a wheel-off design and super fly-wheel that produce a realistic road feel and work very silently. It measures power at the hub, giving consistent and accurate readings. The trainer includes an internal thermocouple to self-calibrate the strain gauge based on temperature variations. The resistance is driven by your iPhone or tablet during the ride and you can go from a 15 per cent gradient to a downhill run immediately. There are ten built-in resistance levels as well as a full manual mode that lets you stay in control.

The device can dual-broadcast the power and speed on ANT+ and Bluetooth Smart/Bluetooth 4.0 simultaneously. This means it is compatible with almost all current ANT+ power meter head units like the Garmin FR310XT/FR910XT/Edge 500/Edge 705/Edge 800, CycleOps Joule units, Timex global trainer and Magellan switch. What is more, the power trainer works on a completely free and open platform. So anyone with programming skills can create an application for it.

Innovative Lessons From Ladakh For Rest Of The World

A Seaweed-Based Battery That Could Be Eco-Friendly