By Deepshikha Shukla based on responses from Navpreet Kaur, director, HCL Samuday

The biggest change required is for governments to view mini-grids as complementary to traditional electric utilities, and not in conflict with them.

The seventh UN Sustainable Development Goal (SDG) aims to wipe out energy poverty by 2030. Despite significant advances in electrification rates on a global level, universal access to clean electricity is far from achieved. More than one billion people around the world still live without access to electricity. India, despite being the third largest producer of electricity in the world after China and the US, was home to approximately 300 million people without access to electricity in 2017. These people mostly live in regions characterised by geographical remoteness and sparse population density, often making an extension of national electricity grid technically difficult and costly.

Established in 2015, HCL Samuday intends to develop a sustainable, scalable and replicable model—a source code for economic and social development of rural areas in partnership with central and state governments, local communities, NGOs, knowledge institutions and allied partners. It aims to improve the quality of life through optimal interventions across agriculture, education, health, infrastructure, livelihood and WASH (water, sanitation and hygiene) sectors in selected villages. HCL Samuday has committed ` 500 million to be spent over a five-year period in its solar program, out of which around ` 280 million has already been spent in the first two years.

The programme is designed to help the local people identify their problems, co-create solutions and then implement the same on their own, thereby lending the dimension of sustainability and ownership to the whole vision of development. It helps rural economies to grow to account for an increase in economic productivity and the value of benefits to health, environment and social well-being. Key projects of this programme are electrification of health facilities, schools and other public institutions like Panchayat Bhavans and Anganwadi Centres, along with providing lighting to houses and reliable energy to micro-enterprises.

In the backdrop of this scenario, decentralised renewable energy (DRE) systems like solar mini-grids, rooftop systems, pico-systems and so on offer a viable solution. Such solutions provide sufficient clean energy that can power entire villages. Access to energy stimulates local economies through energy-enabled micro-enterprise development. Shops and micro-enterprises connected to solar mini-grids have already expanded their businesses by purchasing newer appliances and equipment. A spur has been observed in solar-powered irrigation pumps, crop and dairy farmers opening farms, as well as non-farm based micro-enterprises like mini cold storages, rice hullers and seed processing units, etc.

Mini-grid developers in India—especially solar-based—have concentrated their efforts primarily on perfecting the technology relative to other parts of the ecosystem. Investment in standardising the technology and integration with the Internet of Things (IoT) systems has helped in the reduction of operation and maintenance costs by enabling remote monitoring and control solutions. However, scale-up of mini-grids has not happened as expected, even though the technology has been proven at commercial and industrial scales.

From India’s standpoint, the primary challenge to scale is the government’s perception of seeing mini-grids as contesting rather than complementing central grids, lack of a legal framework for rural electrification by private players and lack of sustainable business models based on sustainable tariff schemes. For example, consider this case where the government of India supported mini-grid development by providing upfront capital subsidies. However, a comprehensive national-level policy was never enacted to support the growth of the sector. Only two state governments, out of 29, enacted their own state-level policies to incentivise and regulate the sector. The biggest change required is for governments to view mini-grids as complementary to traditional electric utilities, and not in conflict with them. 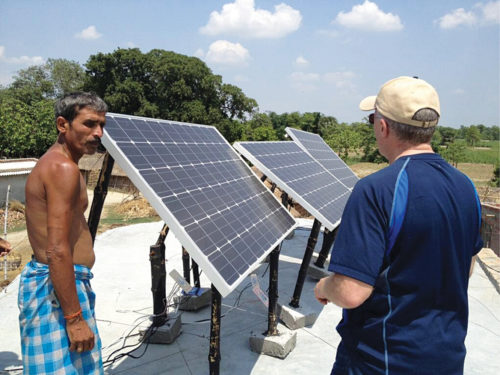 Mini-grids can be a boon to government utilities as these can help in better compliance in tariff collections from rural customers as these are better connected to the grassroots. To ensure sustainable power demand, developers should focus on innovative business models, such as pay-as-you-go (PAYG) and fee-for-service (FFS) partnerships with anchor loads, such as telecom operators and milk chillers, to roll out electricity supply in parallel to rural households.

Currently implemented in three blocks in Uttar Pradesh—Kachhauna, Bender and Kothawan—this programme is operational in 765 villages from 164 Gram Panchayats, comprising 90,000 households and impacting around 600,000 people.

Developing robust partner networks between developers, practitioners, policy-makers and investors to facilitate fund flow into the sector is of primary importance. Involving the government to create a long-term policy for developing technology standards and certification for products and services in the sector is the next important step. Thirdly, developing guidelines for training and capacity-building from the entrepreneurial to technical levels especially for operation and maintenance is important.