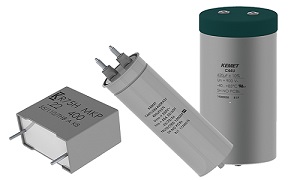 To keep up with the steady growth of renewable (green) energy and technologies, KEMET has launched three new series of metallized polypropylene dielectric film capacitors: C44U-M, C44P-R and R75H.

The R75H series, a radial box pulse capacitor, is similar to the above two in that it supports these applications. Designed with a radial box style for PCB mounting, the R75H Pulse series includes the same high energy density, extended life and reliability benefits. This series meets one of the most rigorous reliability standards in the industry with its high voltage range (up to 2,000 VDC), high capacitance range and high dv/dt capability.

These automotive-grade capacitors can support power conversion for on-board electronics systems and onboard battery management systems in vehicles, micro-inverters in solar panels, and WBG semiconductor devices in power supply systems. This series is designed for versatility in harsh conditions due to its THB (Temperature Humidity Bias) test capability of up to 85 degrees Celsius and operating temperature up to 125 degrees Celsius, well-suited for applications that require miniaturisation and fewer capacitors due to elevated temperatures and frequencies, such as resonant tank circuits with WBG semiconductor components.