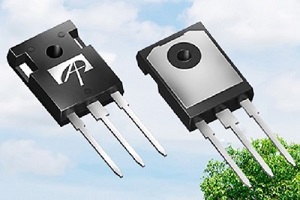 Thanks to the inclusion of a low gate resistance (RG) combined with the low increase in on-resistance (RDS,ON) over-temperature, both AC and DC power losses can be minimised, thus allowing the αSiC technology to achieve high efficiencies across a wide range of application switching frequencies and temperatures. This higher efficiency can result in significantly reduced system costs and total bill-of-materials for the many industrial uses, including solar inverters, UPS system, and EV inverter and charging systems.

Comes with several other benefits

The AOK065V120X2 is designed to be driven with a -5V/+15V gate drive for broad compatibility with existing high voltage IGBT and SiC gate drivers. Operation with a unipolar drive is also possible with optimized system design. Additional benefits of the αSiC platform is a robust UIS capability, enhanced short circuit performance and a maximum operating temperature of 175 degrees Celsius.

“After years of development work, we are excited to add this new next-generation SiC MOSFET technology to Alpha and Omega’s existing class-leading Si MOSFET and IGBT portfolio. Adding to our previously released 650V GaN platform, the αSiC devices further expand our positioning for the projected multi-billion dollar wide-bandgap power semiconductor market. We are committed to providing the optimal technology solution for each customer’s needs,” said David Sheridan, Sr. Director of Wide Bandgap Products at AOS.

Plans are in place to further expand the αSiC MOSFET portfolio later this year to include a broader range of on-resistance and additional package options with full AEC-Q101 qualification. The AOK065V120X2 is currently available in a TO-247-3L package.