Spaceflight system developers often commit to designing with new components only after they have received MIL-STD-883 Class B qualification and are in the process of meeting the Qualified Manufacturers List (QML) Class Q and Class V standards for spaceflight component reliability. Microchip Technology Inc. has now achieved the first qualification milestone with its RT PolarFire FPGA, enabling designers to begin assembling spaceflight systems that take advantage of its superior computing and connectivity throughput, as well as its significantly lower power consumption and immunity to configuration Single Event Upsets (SEUs) as compared to SRAM-based FPGAs. 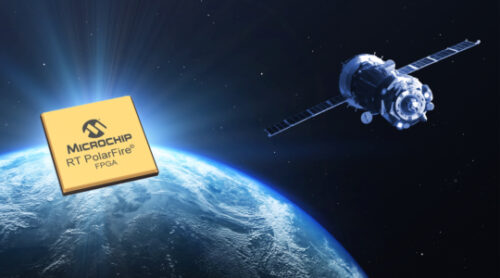 “Microchip is a QML-certified manufacturer of high-reliability FPGAs for space applications and has attained the highest available Class V qualification multiple times on FPGAs and other integrated circuits,” said Shakeel Peera, vice president of marketing for Microchip’s FPGA business unit. “This MIL-STD-883 class B qualification is yet another big step toward solving some of spaceflight’s most difficult system challenges, including reducing satellite signal processing congestion with much lower power consumption and greater reliability than is possible using alternative FPGA solutions. We have started the final step of qualifying our RT PolarFire FPGAs to both QML Class Q and Class V requirements.”

To achieve MIL-STD-883 Class B qualification, the RT PolarFire FPGAs passed a series of environmental tests to determine resistance to the deleterious effects of natural elements and conditions of defense and space operations, as well as mechanical and electrical tests. Passing these tests paves the way for QML Class Q and V qualification while demonstrating the RT PolarFire FPGAs’ reliability advantages in space. Their embedded configuration switches have been shown to be robust to > 100kRad of total ionizing dose radiation exposure, which makes them suitable for most earth-orbiting satellites and many deep-space missions. Unlike alternative solutions, the FPGAs do not exhibit any configuration upsets in radiation and therefore require no mitigation, reducing engineering expenses and bill of materials costs.