The interdisciplinary field of roboics also findsapplications to pursue research in various sectors. A good background in mechanics, control and algorithms is the primary requirement for doing any work in robotics. In addition to this, if one would like to get involved in aerial robotics such as unmanned aircrafts, the basic knowledge of aerodynamics and aircraft mechanics is essential.

Robotics can be broadly divided into mechanical design and control algorithms. There is lot of research happening to improve the motion of robots through a good structural design and enhance their efficiencyand adaptability through better control design, computer vision and artificialintelligence.

Challenges
Standardisation is a major hurdle. As no standard operating systems and software are currently in use, there exists diversity in the possible configurationsin which a robot can be built and also in the hardware used. It is often necessary to write programming codes from scratch when dealing with new robots.

Other issues such as concurrency, cost, compliance control, robot locomotion (particularly for legged, amphibious and flying robots), humancomputer interactions and cognitive computer vision are also facing a great deal of scrutiny with considerable research going on in each area. 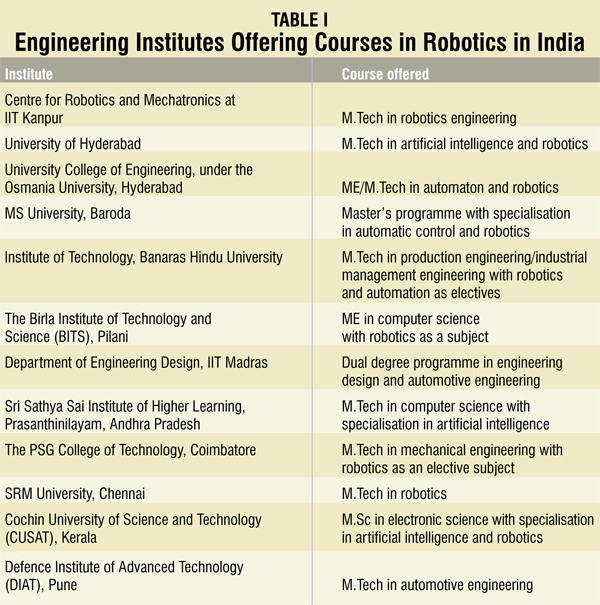 A high level of specialisation is required to work on any particular aspect of robotics. Hence there are not too many options for taking up robotics as a degree itself, especially at the undergraduate level. Robotics still remains a popular course as an elective subject for engineering students.

Opportunities in india
Innovation coupled with consolidated research and development in robot technology has catapulted India’s scientificposition to a level that equals other advanced countries in recent years. It is, however, a known fact that robots are not widely used by Indian companies. Out of 600 to 700 robots widely used in India, most are used in engineering institutes and research organisations (see Tables I and II).

Robotics education is taking shape and many universities are introducing courses in robotics and automation at the postgraduate level as main or elective subjects. Seminars, workshops and conferences are also conducted by universities and institutes at regular intervals to project the recent developments in robotics technologies at national and international levels. These activities have inspired a notable number of under-graduate students to pursue higher studies in the field of robotics and autmation in India and abroad. Students’ participation in various robotics contests, meets and expos at international level has also increased marginally in recent years from India. Private institutes play a big role in robotics training for participation in these events.

Future of robotics
There is no limit to the applications of robotics technology. These range from household to deep sea, space to classroom, and medical to communication. Humanoid robots will impact various aspects of our lives from our workplace to healthcare. In the near future, robots with artificial cognition may develop a will of their own and potentially turn against people spontaneously. To produce intelligent human-like robots that are able to have their own thoughts and take independent actions, technology has to incorporate into the machines a stable and conscientious mindset.

For serving the society in the form of a teaching tool, one may consider a robo-teacher. Incorporating more knowledge at the university level, there might be a robo-professor, who would possibly complete a teaching module from a remote place via the Internet.

In the future, we may even order a robot-replica that speaks, reacts, responds and behaves just like us, preserving our essence in artificial form for eternity. But robotics research is still in infancy and many targets need to be met before all this becomes a reality. So we can follow the saying: “The Road to success is always under construction.”
Subhranshu Sekhar Samal is a scientist-C at the Centre for Nanoscience & Nanotechnology, Chennai, Atirek Wribhu is a final-year UG student in mechanical & production engineering at Sathyabama University, Chennai, and Dr S. Sathyamurthy is a scientist-G and former additional director (electronics) of CVRDE, DRDO, Chennai. Dr Sathyamurthy is presently working as chief consulting scientist at Centre for Robotics, Sathyabama University, Chennai