Ever since Arduino came into being, development boards have become a very common tool among engineers trying to design various kinds of circuits. The market is flooded with development boards with all sorts of features. Any requirement you might have, there is a development board for it. You want to prototype for the Internet of Things (IoT), you have a whole set; you want industrial grade, there is a different line; so on and so forth.

Aided by the open source movement, these boards provide a backbone for electronics designers. Most of these solutions consist of connections that are pre-made and require simply adding the finishing touches. Priced as low as a ₹ 200, these boards can get you started on the way to becoming a circuit designer. 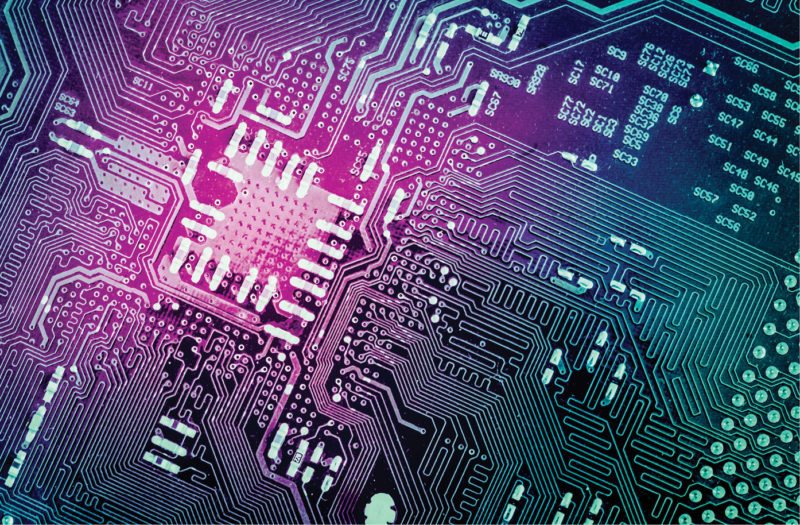 The availability of inexpensive development boards and the possibility of creating projects have been blessings for designers. Prakash Mohapatra, product manager, Toradex, says, “The extensive ecosystem of both hardware and software, backed by strong community support and low upfront cost, make these an ideal choice for hobbyists and academicians.”

These boards are now being used for prototyping circuits before these go into production. For hobbyists, these have come in handy. Automated plant watering systems or automated garage openers have become mainstream projects, thanks to the development boards. Plugging a cable and simply controlling the boards from a computer makes it sound so easy.

Be it a simple garage door opener or a fire breathing robot, Arduino is what comes to mind as the design solution. Initially aimed at hobbyists, the range of Arduino boards has now become a means to test and prototype projects before going into production. It is an attractive solution for professional engineers as a low-cost method for validating a project’s design and quickly building a prototype. The availability combined with a wide variety of possible applications make it a very interesting solution for hobbyists and industrialists alike. But it is not just Arduino that is making a name for itself.

Most companies that have launched microcontrollers in the past decade have seen development support as vital—continuing a trend to support low-volume users. In some cases, microcontroller and software vendors have Arduino as a target for their own product development.

Of late, many new boards have entered the market. For engineers looking to try development, Tivaware from Texas Instruments is a lucrative option. It is compatible with Code Composer and Energia that give a hands-on experience for academicians looking to enter development professionally.

Curiosity boards from Microchip are also an interesting addition. Based on PIC32 microcontroller, these allow for the IoT and connectivity application development.

Mbed initiative from ARM is another option for programmers. It provides an ecosystem for the development of IoT devices, so that part-time developers can join the race.

And, if things were not diversified enough, developers have successfully added JavaScript and .Net platforms to the mainstream environment of C and C++ for usage in development boards to allow software aficionados to enter the game.

Ever since the launch of Raspberry Pi, the definition of computing has changed radically. Tinkerers have started using Raspberry Pi to make robots, data accumulators, phones and desktop computers. Applications are only limited by one’s imagination.

BeagleBoard is another popular board for engineers who like working on Linux. The top-of-the-line board consists of 2GB DDR3 RAM and 4GB 8-bit e-MMC onboard flash memory. With 3xUSB 3.0, eSATA, HDMI and 2xEthernet, it is a serious contender for top performance in development boards.

This board finds a strong contender in UDOO X86 Ultra, which sports a quad-core Intel N3710 SoC clocked at 2.56GHz. Icing on the cake is Intel HD 405 graphics on board, which are supported by 8GB DDR3 RAM. Come to think of it, my PC has got poorer configuration, much poorer! 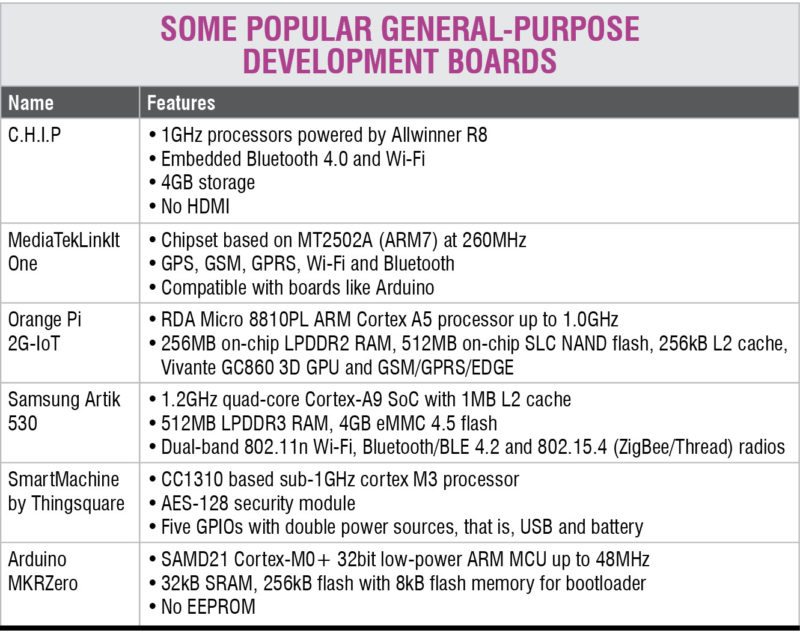 An increasing number of interface options

A lot of development boards come with a multitude of interface options ranging from the very popular USB to technical ports like RS232. T. Anand, technical architect, Knewron, says, “Interfaces like MOD-BUS, RS232 or peripheral component interconnect (PCI) slots still exist and could be prominently seen on industrial boards, while general-purpose boards usually have USB interfaces.”

Arduino, for example, offers Registered Jack 45 (RJ45) and USB 2.0, among others, for connecting and loading programs from a computer. Most ARM based devices include a Joint Test Action Group (JTAG) interface. This can be used to program on-chip or external flash, or load directly into RAM. The JTAG is also the interface for on-chip debug and trace features. Wireless is also being used as one of the interfaces.

RS232 and PCI have been the norm for many years. However, RS232 seems to be an endangered port on computers today. This has brought in the need for a different port on the boards. USB is becoming more and more popular with developers in this regard. Additionally, a separate port is often required for debugging and other purposes. JTAG or single-wire debug solutions come in handy for this purpose.

It is not just the interface, though.

Another reason for the extreme popularisation of development boards can be traced to the wide availability of easily-available open source hardware that allow a lot of customisation. However, it all started with a device that could interact with the environment using actuators and sensors to bring about a clear output that corresponded as an electrical or optical signal. Since then, hobbyists have solved many complex problems ranging from daily applications to the IoT space.

Open source hardware have captured a major chunk of the market for hobbyists. The charm of availability and vast communities for solving issues could be the major factors behind their popularity. Open source allows availability of designs, which can be tinkered with to suit project requirements—another advantage. But as the open source community grows, so do the number of open source boards.

The processing force behind the boards

A9 processors have been the go-to solution for low-power thermally-constrained devices. The earlier version of A9, ARM cortex A8, still adorns BeagleBone Black, whereas Raspberry Pi 2 houses 900MHz quad-core ARM Cortex A7. Clocked at 1GHz, AM335x processor on BeagleBone provides for low power consumption and open source hardware compatibility. So it makes sense to get familiar with ARM architecture for the long run.

8-bit AVR processor ATmega328 from Atmel is another popular development board. With specifications at 32kB flash, 2kB SRAM and 1kB EEPROM, it has a wide support community. However, in case of higher processing power, ARM Cortex-A17 is a solution to look out for. Designed to deliver high performance in a cost-efficient power and area budget, Cortex-A17 sports a 32-bit software ecosystem for mid-range consumer and embedded design. ARM Cortex processors look to be the mainline solution for Linux based development boards.

Which one to select 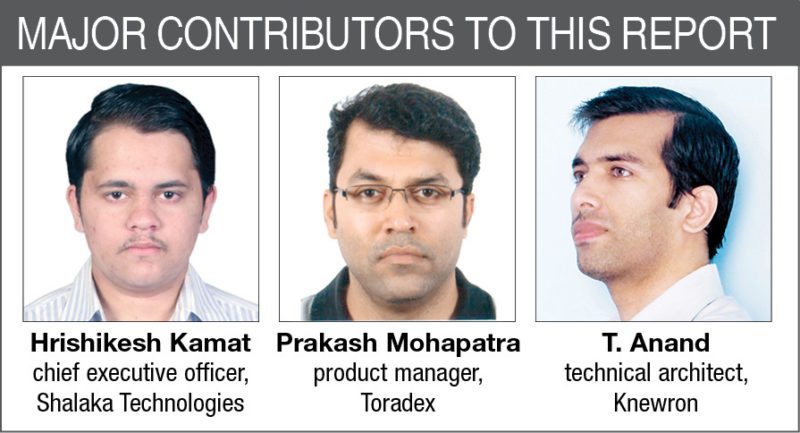 Anand says, “If you are interested in practising or playing, open source development boards are a good starting point.” These get you to develop electronics without having to go through the hassles involved in manufacturing.

Value can also be derived from customised development boards catering to specific applications in the form of reduced timelines and speeding up product development significantly. But once the design is successful, you will have to move towards designing the circuit by weeding out unnecessary parts and bringing in the required components.