Instead of focusing on electric cars, India seems to be focusing on manufacturing electric two- and three-wheelers so far. But what are the hurdles being faced in selling these vehicles, which formed just one percent of the overall vehicle sales last fiscal year? And, more important, how to overcome the hurdles and make use of the opportunity? Read on to find out.

The electric boom has taken the world by storm. Automotive companies are scampering to change their business model to suit the new disruption. At this crucial cusp of the mobility revolution, experts believe that India has found its champion in the race—the electric two-wheeler.

There is no doubt that India has successfully rocketed itself as a forerunner in the global automobile industry, and there is also no questioning the fact that the country favours two-wheelers. So far, internal combustion engine (ICE) and ICE two-wheeler have been the country’s favourable mode of mobility and its electric counterpart has not yet made much of a dent in the market.

Electric two-wheelers represented only one percent of the total two-wheeler sales in the country in 2020, which stood at 150,000 units. The difference is jarring, which begs the question: What do electric players need to do to get the same love from the market? 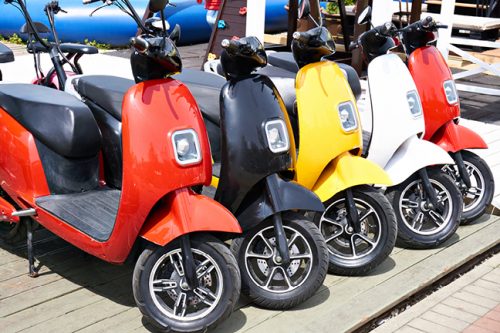 Starts with the customer

A look at the market today presents us with a mixed picture. While the EV industry is picking up pace in India, it is still taking baby steps compared to the pace at which the other global markets are moving. A quick look back and we realise that ICE two-wheeler owners were and still are presented with very few options, whereas electric alternatives come with a wide range of variety.

Scooters and motorcycles are the two sub-segments within the two-wheeler segment that is most popular in India and also in most other parts of the world. While scooters constitute 29 percent of all two-wheeler production in India, motorcycles make up 67 percent.

Yet most electric two-wheeler players have set their eyes upon the scooter segment, leaving the motorcycle market inadequately touched. This means that 67 percent of potential two-wheeler buyers do not have a viable alternative in the electric segment, at least as of now. This, in itself, is a major setback for the average customer that wishes to have a motorcycle but has to reluctantly settle for a scooter.

Given its size and market, India is undeniably a potential hub for electric two-wheelers, but a common and somewhat frustrating hindrance that almost every EV player faces in the country is customer hesitancy. Knowing what the potential two-wheeler buyer is looking at when evaluating an electric alternative is key to a successful transition in the market.

Customers are also on the lookout for the model with the most advanced features. With the market now filling with IoT-enabled and AI-enabled two-wheelers, it can be said that more feature-rich variants are going to be the norm for customers to opt for an electric two-wheeler.

“The newer generation is moving towards how much they can do and how many features are there in terms of the technology platforms that make navigation and access much easier,” says Mohd Sahil Ali, Senior Sustainability Analyst, IHS Markit.

Financing is a major headwind in the adoption of electric two-wheelers. With an already exorbitant upfront price, consumers are also riddled with the uncertainty of the after-sale service and resale value of the vehicle after half a decade or so.

The consumers also need some kind of reassurance towards after-sale service and resale value of vehicle after four to five years. Residual value is also a key concern for the financers, especially in the backdrop of declining battery pack prices and the seven-year to eight-year battery life, which could significantly impact the residual value of repossessed vehicles.

All these factors combine to further the hesitancy among consumers to switch over to electric mobility. Samsher Dewan, Vice President & Group Head—Corporate Sector Ratings, ICRA, suggests, “Industry participants must come out with innovative solutions which could be some kind of a buyback scheme or some leasing options which could help us in increasing the financing penetration.”

The only way to break this hesitancy is to educate not only customers but also such financers and taking them into confidence. One way to do that collectively, says Dewan, is to share data on the actual usage of these vehicles with the financers to give them an idea as to how this segment is actually panning out.

Another weighing factor for customers is the load carrying capability. As per ICRA’s research, 55 percent of electric two-wheelers in the market today have lower load capacity, exceeding which may have some implications on the performance of the vehicle, especially with two or more riders.

The price discrepancies between an ICE model and an electric one is perhaps the biggest factor that prevents customers from making the switch.

There is much debate on the total cost of ownership of an electric two-wheeler and its benefits in the long term. However, it is important to realise that a two-wheeler is the vehicle of choice for usually low to middle-income families, for whom initial price is an important factor. They are unlikely to empty their wallets for a product priced substantially higher than the petrol-run alternatives, no matter how great the long-term benefits.

Sensing this big hurdle, the government of India launched the Faster Adoption and Manufacturing of Hybrid and Electric Vehicles in India (FAME India) scheme with an aim to promote the adoption of EVs in the country. Its recent amendments in Phase-II of the policy has garnered much praise from the industry.

But incentives and subsidies, although an encouraging head starter, are not viable forever. Reducing the upfront costs and providing a robust charging infrastructure needs to be the goal to attract more customers.

Battery – Answer to many problems

The charging infrastructure, an inseparable essence of building a robust EV ecosystem, is still in its nascent stage in the country. To put things in perspective, by the end of March 2021 India had 1,000 charging stations across different cities, which is roughly the same number of charging stations that China adds on a daily basis.

To counteract this dearth, improving the efficiency of battery technology has to be a necessary catalyst to keep the growth trend going. “In the interim, we feel that the improvement in battery technology will also be a game-changer for mass B2C adoption of electric two-wheelers, helping to circumvent the charging infrastructure development to an extent,” advises Dewan.

Battery swapping, for instance, is gaining popularity for its ease of use and accessibility. “For the commuter segment, we expect battery swapping to be a concept that is going to evolve and become a more pragmatic solution, which will help simply because the usage of that segment is going to be significantly higher,” informs Dewan.

Notably, batteries hold a much more important role than just being an alternative charging solution. “Battery is something that is at the heart of the electric vehicle and accounts for 35 to 40 percent of the total cost,” says Naveen Munjal, MD, Hero Electric. According to recent projections by experts, battery costs are expected to lower considerably over the next decade as new chemistries are discovered, and localisation becomes the norm.

What is surprising is that India, despite all its hoo-hah for electric mobility, is yet to enter the realm of battery manufacturing, which is not only a lucrative opportunity but also essential for facilitating price parity in electric two-wheelers and increasing their adoption.

Making it an even better deal is the production-linked incentive (PLI) scheme for manufacturing advanced chemistry cell (ACC) batteries approved by the Centre with an outlay of 180 million rupees.

Munjal agrees, “Localisation is a very important factor. There are some reports that say when battery manufacturing happens in India, it could be one of the lowest cost based manufacturers of lithium-ion batteries.”

Now, while a truckload of challenges continues to affect the industry, it has still undeniably presented various opportunities to make a mark in the segment. And even though manufacturing and R&D are crucial aspects of those opportunities, the electric revolution has also brought about the chance for startups and businesses to be creative with their business models, which was not possible with ICE vehicles.

The plethora of already thriving aggregator models, or any such model for that matter, is not alarming at all, as per Kedar Soman, Co-founder & CTO, eBikeGo. “By no means do I think there is any danger of competition. Right now, we are all scratching the surface of a big disruption or change that is happening.”

As a matter of fact, as these parallel business models keep running, they are creating a certain synergy that is more focused on promoting electric mobility and proving their benefits and making it mainstream. The last-mile delivery strategy is an example of how innovative ideas are springing up at the face of this revolutionising technology. “Nobody has made delivery-specific vehicles in petrol vehicles before, and a lot of such kind of different innovations are going to happen,” Soman says.

In fact, as e-commerce becomes more and more commonplace in Tier 2 and Tier 3 cities, the scope of growth for the aggregator business would be filled with abundance.

India, being one of the biggest automobile markets, provides numerous opportunities for the EV market to flourish. India’s huge automotive export potential, for instance, already gives indigenously manufactured electric two-wheelers and EV component makers an edge to enter various global markets. Along with that, there is also an opportunity to capture emerging markets.

“If you look at China and other Western countries, two-wheelers are not the mass market product over there. But if I look at emerging economies like Africa or Latin America, the product line is very similar to what we have here in India,” says Abhishek Saxena, Public Policy Expert, NITI Aayog. This provides us with the first mover’s advantage, enabling us to build our capacities for not only domestic markets but to also synergise it with the export market.

But riding this ambition on the back of localisation and domestic production is key, says Saxena.

“We have done a lot of manufacturing in India but not a lot of indigenous R&D patents are coming out of India,” Saxena points out. “Until and unless you localise those contents, you will not be cost-competitive in that in the long run,” adds Saxena.

Additionally, boosting efforts to complete the entire value chain is necessary if India wishes to come at par with China.

This article is based on a panel discussion titled ‘E2W India Market Forecast’ hosted by Emobility+. The author, Siddha Dhar, is a business journalist at EFY