Getting started with an Arduino board and uploading the code could be a little confusing for some beginners. Because getting all the details from one source is not always easy. To get started with the Arduino board, first you would need to install drivers, Arduino software or Integrated Development Environment (IDE), and then upload the code (called a sketch) to the Arduino board.

The step-by-step procedure to work with an Arduino board is given below. It is applicable for the PCs using Windows as the operating system (OS), including Windows 7, 8, and 10 versions. The steps are also applicable for Windows XP but some of the dialogue windows may be different.

Follow the steps below to start with Arduino board: 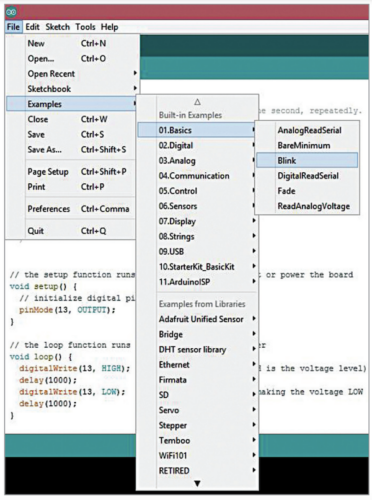 After uploading the code, you can access the Arduino pins or interface the pins with other devices. For example, the above Blink sketch is used to control (turn on/off) an LED through Arduino pin 13. You can change the LED blinking frequency by changing the code in Blink sketch.