Get started with NOT Gate IC | 7400 Series Tutorials

7400 series is an extended family of digital integrated circuits. Chips in this series include a variety of discrete logic chips such as AND gates, OR gates along with a variety of registers, decoders, and RAM units.

Using a 7400 family IC, an engineer can design logic gates, flip-flops, counters, and buffers in individual packages and wire them together as desired to solve a specific problem.  Some most common members of the 7400 family and their functions are,

These are just a few of the full set of 7400 family members. Other IC’s among 7400 series are no longer used as their specific function is rarely required as a separate chip in modern digital electronics designs. However, the parts listed above, and many others that are not listed, are still easily available today and are commonly found in a broad range of digital designs ranging from low-end to high-tech devices. 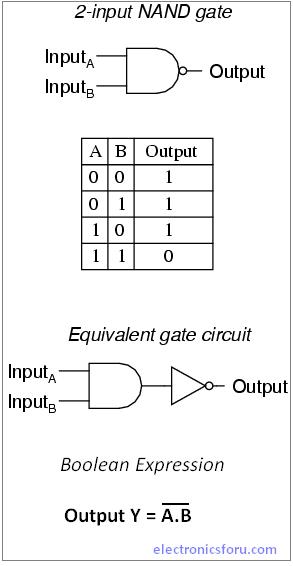 7400 IC is the most widely used TTL (Transistor-Transistor Logic) device in the world. It contains four independent two-input NAND gates. Its popularity is based on the fact that any logic gate function can be created using only NAND gates. Therefore, 7400 is ideal for learning about digital logic as well as a “universal spare” when certain logic functions are needed.

The NAND (Not – AND) gate has an output that is normally HIGH (1) and only goes LOW (0) when all of its inputs are HIGH (1). The Logic NAND Gate is the reverse or “complementary” form of the AND gate.

Commonly used AND gate IC is 7400. It has four independent NAND gates with standard pin configuration. The operating temperature is 70 degree celsius. 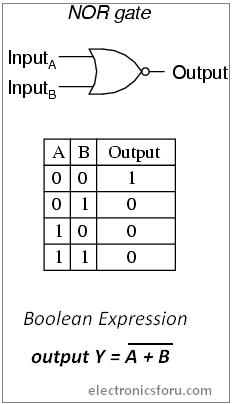 The NOR gate is a digital logic gate that implements logical NOR. A HIGH output (1) results if both the inputs to the gate are LOW (0), if one or both input is HIGH (1), a LOW output (0) results. NOR is the result of the negation of the OR operator. It can also be seen as an AND gate with all the inputs inverted. NOR is a functionally complete operation because the NOR gates can be combined to generate any other logical function. It shares this property with the NAND gate. The truth table Boolean expression and the symbol of a NOR gate are below.

The commonly used NOR gate IC is IC 7402. It has four 2-Input NOR gates in 14-Pin DIP Package. The special features include large operating voltage range and wide operating conditions. 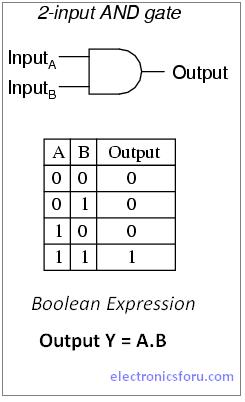 A Logic AND Gate is a type of digital logic gate that has an output which is normally LOW (0) and only goes HIGH (1) when all of its inputs are HIGH (1). The output state of a “Logic AND Gate” only returns “LOW” again when any of its inputs are LOW (0). In other words for a logic AND gate, any LOW input will give a LOW output.

The truth table, symbol and Boolean expression for AND gate are below.

The commonly used AND gate IC is 7408IC. It consists of a four 2-input logic AND gates in a 14-pin DIP package. It supports wide operating voltage range and has wide operating conditions. 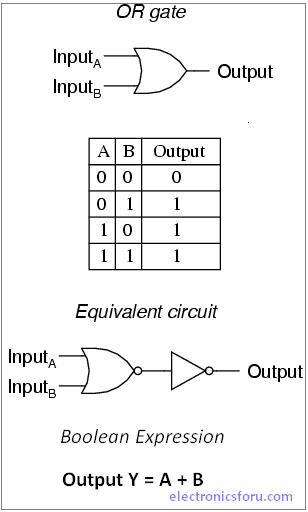 The truth table, symbol and Boolean expression for OR gate are below.

The commonly used OR gate IC is IC7432. It consists of four 2-input OR gates in a 14-pin DIP package. The datasheet for IC 7432 is available at 7432 Technical Datasheet.