While radar technology was initially focused on military and commercial aviation applications, today there are many commercial applications. Short-range radar is increasingly being used in automotive applications for collision avoidance, driver assistance, and autonomous driving. Specialized radars can also be used to provide imaging through fog and walls and some can even help underground. 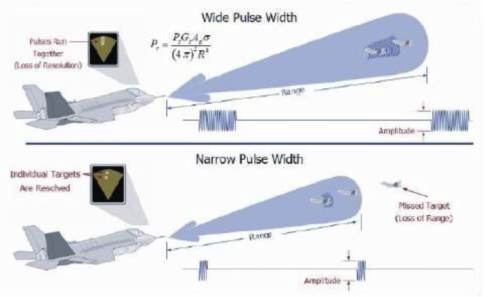 Typically, radars illuminate their targets with an RF pulse and then listen for the return echo. Since the RF pulse propagates at the speed of light, the time it takes the echo to return is proportional to the distance from the target. The radar equation, as it is commonly known, defines many of the engineering trade-offs encountered by radar designers:

The radar equation relates the expected received power (Pr) to the transmitted pulse power (Pt); based on transmit antenna gain (Gt), area of the receiver antenna (Ar), target cross section (aka reflectivity) σ, range from the transmitter antenna to the target (Rt), and range of the target to the receive antenna (Rr).

Unlike many communications systems, radar systems suffer from very large signal path losses. The round-trip distance is twice that of a typical communications link and there are losses associated with the radar cross-section and reflectivity of targets. As can be observed from the radar equation, the range term is raised to the fourth power in the denominator, underscoring the tremendous signal power losses radar signals experience.

Although there are several continuous transmission types of radar, primarily Doppler, the vast majority of radars are pulsed. The RF pulse characteristics reveal a great deal about radar’s capability. Electronic Warfare (EW) and Electronic intelligence (ELINT) experts specialize in the study of these pulsed signals. Pulse characteristics provide valuable information about the type of radar producing a signal and what its source might be — sailboat, battleship, passenger plane, oncoming car, etc.

For pulsed radars, the range and resolution are determined by the pulse repetition frequency (PRF), pulse width (PW), and transmit power. A wide PW generally provides better range, but poor resolution. Conversely, a narrow PW supports less range, but better resolution. This relationship constitutes one of the fundamental trade-offs in radar engineering. Pulse compression with a modulated carrier is often used to enhance resolution while maintaining a narrow PW for higher power and longer range.

The measurements needed for radar vary depending on the job to be done and the type or radar to be characterized. From radar system design and component selection to the surveillance of deployed radars, accurate and fast measurements are required with reproducible results.

When performing radar design verification, there is a need to ensure the transmitted signal is correct, that the receiver responds to and detects the correct signals and that there are no spurious signals emitted from the transmitter. Production testing involves verification that each manufactured product meets its specifications. Test tasks include tuning and calibrating assemblies, along with the compensation and calibration of analog modules, linearizers, and amplifier components. Results must be accurate and repeatable to ensure the final product will function as intended. As component and subsystem vendors make changes to their processes, continued verification of performance is required without varying the tests throughout the product lifecycle.