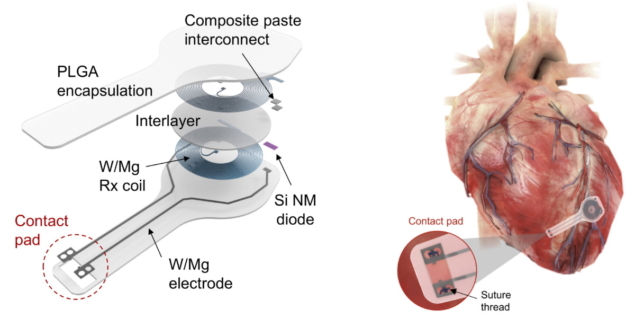 Pacemakers control the irregular heart rhythms by sending small electrical pulses to prompt the heart to beat at a normal rate. They continuously monitor the heart rhythm and senses when the heart is beating irregularly or too slowly. Pacemakers usually consist of three elements: a pulse generator, one or more leads, and an electrode on each lead. Electrode touches the wall of the heart and senses the heart’s electrical activity. The information is provided to the pulse generator. The leads deliver the electrical impulses to the heart. If the rate is slower than the programmed rate, electrical impulses are sent through the leads to the electrodes causing the heart to beat faster.

Temporary pacemakers are used in emergency medical treatment of patients having dysfunction in the cardiac conduction system. They are also used for patients with short-term heart rhythm disorders following cardiac surgery or while waiting for a permanent pacemaker. But there are complications involved in installing the temporary pacemakers. They require an external hardware with leads inserted through the skin, risking infection and limiting patient mobility. During such times, malfunction may also occur because of electrode displacement. Moreover, the removal of these pacemakers after usage can damage the heart-tissue.

To solve these complications, researchers from Northwestern University and The George Washington University developed an implantable cardiac pacemaker that operates without external leads and completely dissolves in the body after completion of therapy. The pacemaker is made of materials that completely decompose by gradual breakdown in a time-controlled manner. Thus eliminating the need for surgical removal. Additionally, the implantable device provides control of heart rate and rhythm after the surgery. The researchers described the innovative device in Nature Biotechnology.

The device relies on wireless energy transfer to deliver power and perform exchange of data. The receiver power harvester includes an inductive coil made from tungsten-coated magnesium, a radiofrequency PIN diode based on a silicon nanomembrane, and a dielectric interlayer of the biodegradable polymer PLGA. To deliver electric stimuli, the device includes tungsten-coated magnesium electrodes connected to dissolvable metallic contact pads that attach to myocardium-the muscular tissue of heart.

A rigid device on soft tissues of the heart can result in mechanical mismatch and so, the team of scientists needed soft materials. Igor Efimov, who led the study says, “The development of soft organ-conformal electronics by Rogers’ group solved this problem,”. He further added, “The next step was the development of bioresorbable electronics. This was a game changer for many clinical needs of temporary implantable devices.”

The entire implantable device is just 16 mm wide and 250 μm thick, made entirely of bioresorbable materials: PLGA dissolves into its monomers, glycolic and lactic acid, while tungsten-coated magnesium and the silicon nanomembrane degrade into nontoxic products. The flexibility of these materials also enables the device to attach to the curved surface of the heart and adapt to its movements.

The team of researchers tested the device on ex vivo mouse, rabbit hearts, and a slice of human tissues using RF power from a nearby transmitting antenna to initiate pacing. The device worked successfully for initial four days and then, its performance started to degrade. After six days, the pacing stopped. The researchers say that the timescales for stable operation and complete bioresorption can be tailored to meet specific clinical requirements.

The researchers are now planning to develop implantable pacemakers for pediatric patients who require a temporary pacemaker for several days after surgery.