On October 2, 2015, at Times Square in New York City, USA, the renewable energy sector’s most efficient solar panel was announced by SolarCity. Clocked at 22.04 per cent efficiency by Renewable Energy Test Centre, these cells enable users to extract maximum power from the large fusion explosion in the sky that we endearingly call our Sun. What other technology advances drive the renewable sector?

“In data centre server racks, power requirement is based on the server situations. Enabling customers to have access to power demand per server rack allows them to better optimise the systems,” explains Simarpreet Singh, head strategy, Hartek Power Pvt Ltd.

National Renewable Energy Laboratory CSP group manager Mark Mehos, co-author with Jennie Jorgenson and Paul Denholm of the study, finds that concentrating solar power (CSP), with its ability to store energy for several hours or more, helps maintain firm capacity in those hours when the Sun is below the horizon.

While photovoltaics convert light into electricity, CSP technologies concentrate the Sun’s energy and capture it as heat, which then drives an engine or turbine to produce electrical power. However, NREL explains that thermal energy CSP generates can be held back for several hours via storage systems such as molten salts. These can later be used after the Sun sets. 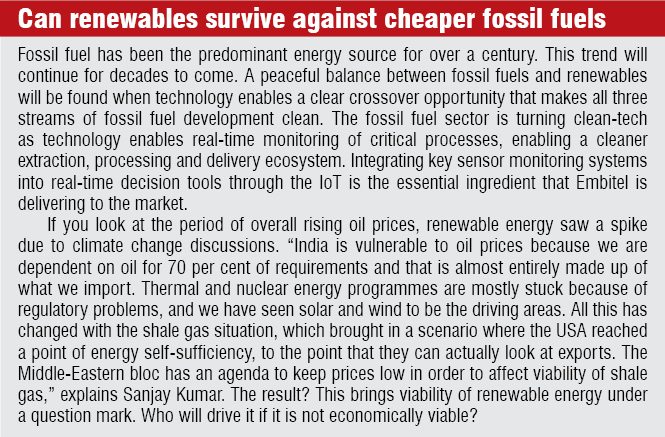 While SolarCity has the highest efficiency in mass-produced solar cells, the world record is held by a 46-per-cent-efficient multi-junction solar cell developed by Soitec and CEA-Leti, France, together with Fraunhofer Institute for Solar Energy Systems ISE, Germany.

As wind turbines increase in number, atmospheric science professors from University of Kansas, USA, found in August 2015 that wind turbines in large wind farms trigger a slowdown effect. This causes a decrease in the power generated per wind turbine as each additional turbine is installed.

While controlling the number of turbines is one way to prevent this problem, one Spanish start-up may have found a solution. Called Vortex Bladeless, the company is working on building blade-less turbines. It converts oscillations caused by vortices, created by air movement around the structure, into power using an alternator at the base of the device. The blade-less design reduces manufacturing costs, allows to have a denser installation in a given area and is much more silent than existing wind turbines.

In addition to hardware, there are innovations in the form of control systems that improve renewable energy sources. For instance, researchers at Applied Electronics Research Team have developed an adaptive algorithm that orders the wind turbine to adapt to change in wind speed such that the efficiency is at the maximum.

Connecting renewable energy with communities
Something similar to connected small energy sources can be read about in the sequel to the Social Science fiction book Daemon, released in 2006, by author Daniel Suarez. The setting described in the book has self-sufficient communities using natural energy sources and connected technologies to avoid the centralised agency-controlled systems seen today.

What we are working on now is to make the system smart. Everybody has a combination of biomass, wind, solar and biogas. “With the new model, everyone could be a consumer and everyone could be a generator of energy. So any building with surface area available on top can be used to generate and supply extra power to the grids in the morning and then consume the power at night if it needs it,” says Prabaljeet Kalia, product manager – drives and motion, Fuji Electric.

Most energy systems (oil, wind and solar) from the last 30 years have been installed as open-loop systems, creating a challenging business case for sustained business feasibility. Technology is now enabling these energy verticals to be integrated into a holistic ecosystem, linking these together in a closed-loop structure. “As an example, multiple residual constituents (such as natural gas or carbon-dioxide) are by-products of energy extraction. Technology is enabling these constituents to be used as renewable sources of energy that can be used in a closed-loop environment,” explains Shuey.

Embitel, a product engineering services company based in Bengaluru, is connecting the elements of the energy ecosystem through technologies like sensors, communication gateways, cloud storage and retrieval, data analytics and finally the graphical user interfaces (GUIs) that enable operators to make real-time decisions to optimise the performance of the energy domain. These are all essential to enabling an energy system that meets the needs of the global community.

Alok Chandna, power and social infrastructure initiative, Fuji Electric, says, “We have partnered with a company named Lotus Wireless that provides management and control systems for developing building energy management systems (BEMSes). BEMS depends a lot on weather conditions. For instance, if you know that tomorrow will not be sunny, you know that your solar-energy-harvesting system will not work, so you will need to charge your batteries in advance so that you can use these or figure out an alternative source of energy like wind or hydro or a backup grid.”