Hydroelectricity is one of the oldest and renewable forms of power generation. Of the total power produced in the world from renewable resources, about 70 per cent is generated through water. This makes up for about 16.6 per cent of the total electricity produced and is expected to increase at the rate of three per cent every year.

He found that when a magnet is moved past a conductor, it causes electricity to flow. In a large generator, electromagnets are made by circulating direct current through loops of wire wound around stacks of magnetic steel laminations. These are called field poles and are mounted on the perimeter of the rotor. The rotor is attached to the turbine shaft and rotates at a fixed speed. When the rotor turns, it causes the field poles (electromagnets) to move past the conductors mounted in the stator. This, in turn, causes electricity to flow and a voltage to develop at the generator output terminals.”

1. Hydropower is produced using water—a clean fuel source. So unlike power plants that burn fossil fuels such as coal, it does not cause air pollution.

2. Each region with access to a river or any other water body with flowing water is capable of generating its own hydroelectric power.

3. Among all the renewable sources of energy, hydroelectric power makes up for the most cost-effective and reliable power resource. It is recognised and harnessed the most across the world, since the main source of water cycle is sun, which is indestructible.

4. In the process of creating hydroelectricity, normally in dams, reservoirs are created. These reservoirs are often used for commercial activities like fishing and boating.

5. Using the power of turbines, hydropower plants can produce zero to maximum energy output in very less time. Hydroelectric power is therefore used as power backup in disruptions and during emergencies.

6. Manual control over an otherwise naturally free water body like a river can be utilised to solve various problems like water supply, irrigation and flood control as well. 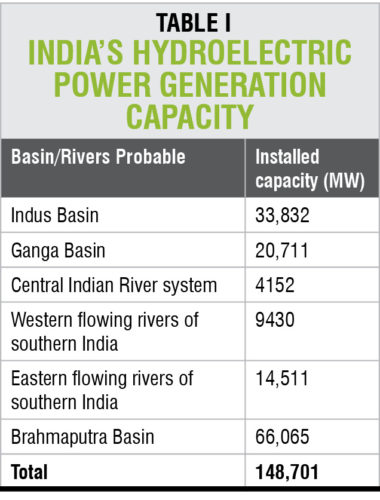 The government is encouraging the private sector to invest in the hydroelectric segment. Currently, private-sector involvement is only about seven per cent. Private-sector participation will lead to revival of stranded projects. To attract investment, the government is looking at various options like land and other subsidies, and waving of taxes and custom duties.

Built on Bhagirathi, a tributary of the river Ganges, Koteshwar Power Project generates about 400MW electricity. It is one of the quickest project implementations in the nation and has been generating almost 1200GWh energy annually.

Prior to this, a river diversion task was completed in 2003. However, the project came to a halt for the next four years following challenges like exponential rise in the cost of raw material leading to fund insufficiency, difficulty in reaching harmonious conclusions with native population of the region and difficult geographic situations. Despite all odds, the first two power generation units of Koteshwar project were commissioned in 2011 and the two more in 2012, completing the project before the expected deadline.