LTE, with its spectrum flexibility, has a good life ahead since it can be accommodated into many different swathes of spectrum. It uses wider chunks of spectrum, allowing nearly four times faster data transfer than 3G -- Deepak Halan 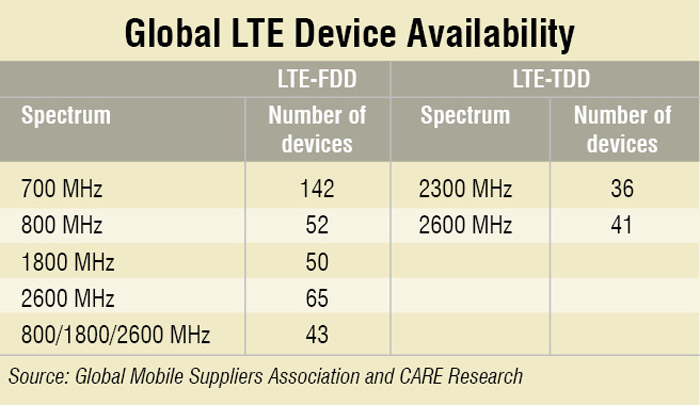 The LTE system can be scaled from 1.4 to 20 MHz; 1.4 MHz, 3 MHz, 5 MHz, 10 MHz, 15 MHz and 20 MHz wide cells are standardised. This means that apart from being able to operate in various frequency bands, it also promises scalable bandwidth. Networks can be launched with a small amount of spectrum, alongside existing services, and more spectrum can be added as the number of subscribers grows. It also enables operators to customise their network deployment as per their needs and available spectrum resources rather than being forced to make their spectrum fit a certain technology.

The high bandwidth of a single-carrier radio delivers superb economies of scale vis-a-vis multi-radio legacy approaches. It also provides scope for considerably bigger capacity than 3G-3.5G technologies that are limited to 5MHz or smaller spectrum bandwidth. It must be noted that since LTE uses wider chunks of spectrum, data transfer on LTE-based 4G networks is nearly four times faster than on 3G. LTE with its spectrum flexibility has a good life ahead since it can be accommodated into many different swathes of spectrum.

Worldwide LTE scenario
Radio spectrum is the lifeblood of a mobile operator and has emerged as a very precious resource that is high in demand and low in supply. Hence regulators across the globe are looking to release new spectrum in order to enable broadband services at all levels. Spectrum in the 2.6GHz band is of interest across Europe. A big chunk, i.e., 140 megahertz of the spectrum (2×70 MHz), will be deployed for FDD services like LTE, while another 50 megahertz for the unpaired TDD band will most likely be used for WiMAX services. The 2.6GHz spectrum has the potential for higher-capacity and lower-frequency communications, enables better propagation and is a good choice for facilitating hotspots.

LTE is also being associated with GSM900 and GSM1800 bands, which are the most omnipresent and harmonised wireless spectrums available at global level. These also provide the benefit of increased coverage and subsequent reduction in network deployment costs compared to deployments at higher frequencies. Moreover, 900MHz offers better building penetration and is better suited for rural areas.

In some markets, operators could choose to migrate subscribers from their GSM frequency

bands to UMTS (which uses wideband CDMA or WCDMA), easing the stress on their GSM networks and freeing up some spectrum capacity on the band. On the other hand, certain operators may like to deploy LTE in their 1800MHz frequency band and let the GSM network remain as it is, since GSM networks worldwide have been comprehensively optimised.

The subscriber migration from GSM to UMTS is taking place in over 150 countries worldwide. With enhanced spectrum efficiency, LTE deployment in the 900MHz band would bring the highest capacity benefit and also provide telcos the ability to deploy an LTE network with greater coverage at a much lower investment vis-à-vis the higher-frequency spectrum. Moreover, the advantage of refarming the 900MHz spectrum for LTE over using WCDMA spectrum lies in the fact that LTE can be deployed in channel widths as small as 1.4 megahertz, enabling operators to grow the network as the demand for GSM services falls. In contrast, WCDMA networks ideally require a complete 5MHz contiguous channel width.

Way forward
In India, small and medium-size businesses starved of high-speed Internet are being looked upon as the lower hanging fruit in terms of LTE demand market. To start with, LTE would be used mostly via dongles (fitted with an LTE chipset) plugged into laptops and desktops. Lack of compatible devices is the biggest challenge to fast penetration of TDD-LTE in India. As of now, there is perhaps no smartphone or tablet form factor that supports this technology.

LTE is expected to be first deployed in the metros (cities with population of over four million), then percolate down to tier-1 towns (1.1-4 million population towns). However, rural India in the first place can benefit a lot from this technology.

Wireless broadband would be a boon for rural areas in terms of last-mile connectivity since the existing physical infrastructure in terms of DSL is highly inadequate and the installation would require heavy investments and time. The quality of life of millions of rural citizens can be immensely improved by services such as telemedicine and e-education that will reach them with broadband proliferation. Hence the government should urgently investigate options for allowing more spectrum to be allocated for BWA services in 700MHz band.

The ability to reap benefits of new spectrum allocations and the opportunity to potentially refarm existing GSM spectrum are the two main factors that will drive LTE deployments. Enhancing network capabilities presents new deployment opportunities with economies of scale and opens up markets that were previously untouchable. LTE will considerably improve end-user throughputs to deliver a significantly improved user experience across the globe.

The author has been consulting in the telecom sector and is currently associate professor in School of Management Sciences, ApeejayStya University