The New world of Plasma Antennas 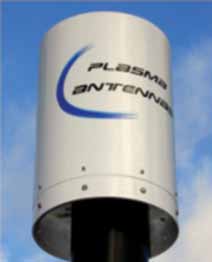 Transmission and reception of electromagnetic waves have become an integral part of the present day civilisation. Antenna is an essential device for this process. It is a transducer that transmits or receives electromagnetic waves. In other words, antennas convert electromagnetic radiation into electric current, or vice versa. Antennas are used in systems such as radio and television broadcasting, point-to-point radio communication, wireless LAN, cellphones, radar, and spacecraft communication. Antennas are most commonly employed in air or outer space, but can also be operated underwater or even through soil and rock at certain frequencies for short distances.

Growing need for speed of communication network along with data handling capacity are the major forces helping to explore new vistas of transmission and reception. With the wireless generations moving from 2G to 3G, 4G, 5G and so on, the real benefit of upgrading the Wi-Fi networks is to get them to run faster. Wi-Fi usually can manage 54 megabits of data per second. The fancied Wi-Fig (a graphical user interface for configuring wirless connection) would handle up to 7 gigabits per second. This would mean downloading a TV show in a matter of seconds. Advances in antenna technology are expected to play a great role in the desired speed and capacity-handling capabilities of communication networks.

Antenna technology
Physically, an antenna is an arrangement of one or more conductors, usually called elements. In transmission, an alternating current is created in the elements by applying a voltage at the antenna terminals, causing the elements to radiate an electromagnetic field. In reception, the inverse occurs. An electromagnetic field from another source induces an alternating current in the elements and a corresponding voltage at the antenna’s terminals. Some receiving antennas (such as parabolic and horn types) incorporate shaped reflective sufaces to collect the radio waves striking them, and direct these waves onto the actual conductive elements.

Some of the firstrudimentary antennas were built in 1888 by Heinrich Hertz (1857-1894) in his pioneering experiments to prove the existence of electromagnetic waves predicted by the theory of James Clerk Maxwell. Hertz placed the emitter dipole at the focal point of a parabolic reflector.

The words antenna (plural: antennas) and aerial are used interchangeably, but usually a rigid metallic structure is termed an antenna and a wire format is called an aerial. The origin of the word antenna relative to wireless apparatus is attributed to Guglielmo Marconi. In 1895, while testing early radio apparatuses Marconi experimented with early wireless equipment. A 2.5-metre long pole along which a wire was carried, was used as a radiating and receiving aerial element. In Italian a tent pole is known as l’antenna centrale, and the pole with a wire along side it used as an aerial was simply called l’antenna. Until then wireless radiating, transmitting and receiving elements were known simply as aerials or terminals. Marconi’s use of the word antenna (Italian for pole) became a popular term for what today is uniformly known as the antenna.

Since the discovery of radio frequency (RF) transmission, antenna design has been an integral part of virtually every communication and radar application. Technology has advanced to provide unique antenna designs for applications ranging from general broadcast of radio frequency signals for public use to complex weapon systems. In its most common form, an antenna represents a conducting metal surface that is sized to emit radiations at one or more selected frequencies. Antennas must be efficient so the maximum amount of signal strength is expended in the propagated wave and not wasted in antenna reflection.

There is a long list of antenna designs with their suitability, advantages and limitations. There are many antenna types and many ways of categorising them. Antenna types can be used to differentiate antennas for radios, televisions and radar systems. Because antennas can be built for transmission of different frequencies, another way to categorise antenna types is by their frequency. For radio antennas, it’s important to know whether these are built for, say, frequency modulation (FM) broad-casting at 88-108 MHz or amplitude modulation (AM) broadcasting at 535-1605 kHz . For television antennas, one distinguishes between ultra-high frequency (UHF) antennas and very-high frequency (VHF) antennas, or antennas that pick up both.

Stores that sell antennas categorise various types on terms of customers’ needs. The range of antennas can be categorised as short, medium or long. For customers buying a television antenna, the decision is dependent on how close they are to the transmitting towers that they wish to pick up a signal from. If the range is well-matched to the distance, it will help avoid the antenna picking up unwanted signals.