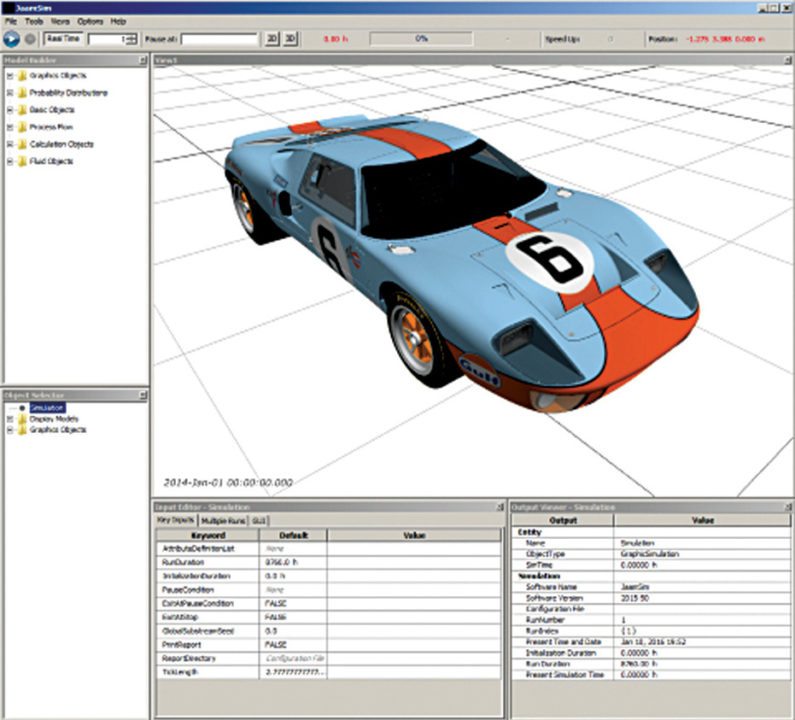 JaamSim provides Model Builder and Object Selector to help manoeuvre through the entire system design. While these let you view and select components of the system, each parameter can be customised via Input Editor. Control Panel provides required run control features for simulation. Outputs are mostly pre-programmed depending on the design, but the user can also create outputs for the model using attributes, and even custom outputs for individual blocks. Model outputs can be seen on Output Viewer, while Graphical Window displays a graphical representation of the same.

Look before you leap. Input data has specified formats, and the system can also involve algebraic expressions or Boolean logic. A given input is validated to make sure it satisfies the needed constraints before being applied to the system. Areas that require a red-green-blue (RGB) colour scheme can use standard colour keywords instead of explicit RGB values. This would be as simple as using pink instead of 255 192 203.

Handling numbers. Numerical details are given in International System of Units (SI units), unless otherwise specified, and a mouse hovering over the output name displays a tool-tip pop-up with a brief description of the selection.

Aesthetics takes an all-new meaning today, and this software keeps up with the trend by letting you change the graphical appearance of the designed model. This feature also comes in handy when moving to designs of higher complexity, as then the placement or appearance might even affect functionality. For example, if a magnet is placed next to a transformer, there is a chance of signal interference.

As you use the software, you can choose between a 2D or 3D view, the former giving a bird’s-eye view directly above xy simulation plane and the latter adding a sense of depth in all directions. These views only define the camera position, always giving you full-3D perspective graphics and letting you zoom, pan and orbit over the workspace. Well, there is nothing stopping you from doing a 3D animation.

The extras. A feature called Overlay Object can be used in the graphical display as position references, since these are positioned at the corner of a view window and do not move when the view is panned or zoomed. The software also generates graphs of selected parameters to help study behaviour in detail. You can even save a video of a model in operation, which can later be viewed on VLC player. As the generated video format is not compatible with all software, and is slightly on the higher side when it comes to storage space, developers recommend using software such as HandBrake for professional purposes.
Simulating a hydraulic generator, maybe

If the problem at hand involves dealing with fluids, a fluid objects palette in JaamSim provides exclusive objects for building dynamic models. The objects allow for details right from defining properties of the fluids under use, to fluid flow between source and destination, vessels for storage, pipes for transportation and also centrifugal pumps.

Taking a cue from experience

An extremely-fast simulation software that Jaamsim is, it lets one scale it to the largest of applications. Once you are familiar with the language and the tools, you can create additional palettes of high-level objects for advanced requirements. The developers have built the software with over 35 years of simulation practice, with every lesson learnt inculcated into the tool in some form.

Built on this strong background, alongside a neat website (www.jaamsim.com), developers have gone on to start a company, JaamSim Software Inc., to develop, promote and offer support. Enough said! Looks like JaamSim is already inviting you to jump in and try your hand at simulation, if you have not already.

Priya Ravindran is a freelance writer with EFY