What your pocket says

Let’s turn to money matters. This field offers enough provisions for learning as well as earning. The starting salary for a fresher is typically between Rs 150,000 and Rs 200,000 per annum with impressive year to year hikes. Coming to experienced professionals, the PCB industry offers salary in the range of Rs 500,000 to Rs 600,000 per annum for people with four to five years of experience.

“As a fresher one can not expect high salary. But after an experience of five-six years, and with understanding and implementation of standards, one can expect a very good package and may act as a team leader,” adds Singla. And of course if you grab an international opportunity, the pay is quite good even for freshers. It is needless to mention that PCB designers can experience much better growth while working with an MNC.

“It’s been my experience that the designers who work on the higher-end or more expensive CAD tools (i.e., Cadence Allegro and Mentor Graphics) seem to get paid a little higher than designers who work on the lower-end or less expensive systems like Altium and PADS. As I mentioned earlier, back in the late 90s, as long as you were a good designer you would be hired regardless of the CAD tool. But now, unfortunately, hiring-managers seem to put an emphasis on which CAD systems you’re running and even what version, etc,” opines Derek Doucette, an executive with American Contract Group, a Massachusetts-based staffing firm. He has been placing candidates into PCB design positions since the 1990s.

“A designer once told me, “Besides a few features here and there, they basically all do the same thing. 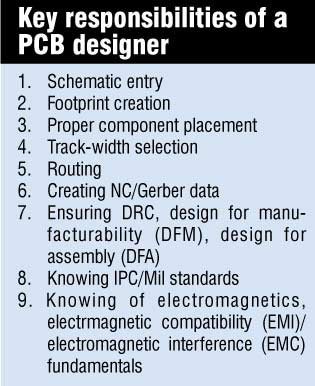 You just need to find out where they place the buttons.” I believe that if you are a good designer on one CAD system, with a slight learning curve, you should be able to pick up another system with no problem,” Derek told PCBDesign007 in an interview.

It is difficult to point out a particular industry as the major recruiter of PCB designers. Aspirants in this field may look for opportunities in all industries which are directly involved in manufacturing electronics products. These include telecom, automotive, biomedical equipment, computer hardware, electronic security systems, consumer electronic appliances, mobile companies, industrial automation and power electronics, amongst others.

“The big organisations always have a team of six-eight designers while the middle ones have two-five designers. The team size depends upon the development of new hardware or modification of the existing one, and also on the size of the R&D team. However, to name a few, some of the major recruiters in this field are Bharat Electronics Limited, Semiconductor Complex Laboratory, HCL, L&T, GE, HP, Beetel, Nokia, Samsung, LG, Ericsson, Sony and Philips,” informs Singla.

Getting the job signal

Recruiters look for electronic and information engineering (EIE), EEE and ECE engineers with basic electronics components knowledge with any board design software like OrCAD, Allegro, Altium or PADS. At present, most of the companies are using Or-CAD and Allegro for circuit board design.

A PCB designer’s ‘must haves’ as stated by Singla are as follows:

If the PCBs are not designed properly, one runs the risk of facing a high level of rework/rejection of populated or unpopulated PCBs. “I have also seen a lot of circuit malfunctions/ failures in the field, which are a result of poor design, fabrication or soldering techniques,” Singla says. He also suggests that PCB designers should have a detailed knowledge of not only PCB fabrication but also soldering techniques. Also, they are required to be kept abreast of the limitations of PCB manufacturers with respect to minimum drill-size, minimum track-width, minimum track-to-track and track-to-pad distance, tolerances, etc.

Feel interested? Check out the career guidance section for more.