Arduino is a perfect mindless slave. Give it a job and it performs the task endlessly without defaulting even for a nano second. On the other hand, Raspberry Pi, or Raspi, is a computer that has a brain of its own. But, it may falter as it gets busy doing some other job at that moment. Imagine a situation where Arduino is doing the job and Raspberry Pi is supervising it!

Described here is a temperature indicator project using Arduino and Raspi boards. A temperature sensor such as LM35 gives analogue output. Arduino has analogue pins whereas Raspberry Pi does not. LM35 is interfaced directly to Arduino analogue pins and then connected to Raspi. It displays the temperature on the terminal. Let us see how.

Arduino development boards are available in many variants in the market. I have used Arduino Uno board for this project. The LM35 temperature sensor is easily available in India. It produces analogue voltage directly proportional to temperature with an output of 1mV per 0.1°C (10mV per degree). The sensor has a temperature range from -55°C to +150°C.

Connect LM35 sensor with Arduino as shown in Fig. 1 and then connect the USB cable to the computer. Open Arduino IDE, compile and upload the following arduino_temp.pde sketch (program) into the UNO board:

The sketch (program) converts analogRead values into millivolts and divides these by 10 to get degrees.

So far so good!

You must have a Raspi board with basic set-up and an Internet connection. Install Python, Python-serial and any serial communication software, like Putty or Minicom. I prefer Minicom communication software as it is very light and fast. To install these on Raspi computer, give the following command:

Now, in order to use Raspi’s serial port, we need to disable getty (program that displays the login screen). To do this, locate the following line in file /etc/inittab by issuing the command given below:

A screen will pop up, where you need to remove a line that includes getty and 115200. Just comment it out by adding # in front of the line as shown below:

Save it and exit.

Now, when Raspi boots up, it sends data to the serial ports. We need to stop it from /boot/cmdline.txt file. This is a plain text file, parsed by Raspi as a text file. You need to remove a line from cmdline.text file by issuing the following command. (You need to have a backup file of this, so save the original file as cmdline_backup.txt.)

Save and exit. Reboot your Raspi so that everything comes into effect. 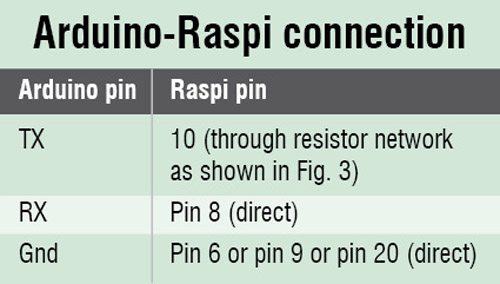 Arduino will sit on top of Raspi and then interact with the LM35 sensor. Arduino will give data to the serial port of Raspi.

But, do not do that yet. Your Raspi board will be damaged beyond repair. The voltage level of Arduino output pin is approximately 5V, whereas that of Raspi is hardly 3V. We need to reduce Arduino I/O to the matching voltage level of Raspi using the circuit shown in Fig. 3.

Only three wires are to be connected, rest is the power supply that can be separate or common. Serial connection wires, TX and RX, will be interchanged with each other using a resistor network, as shown in the table, on Arduino TX pin to Raspi RX pin (pin 10).

Now, our main intention of making Arduino piggyback on Raspi is on the way. After connecting Arduino and Raspi, as shown in the table and Fig. 3, switch on the power supply of both boards.

Connect Raspi either through a headless mode or in direct mode (I always prefer the headless mode) and then run Minicom as follows:

Minicom has a help window that can be accessed by pressing Ctrl+a, z command to see more detail on Minicom.

Minicom will fetch the analogue data from serial port of Raspi and display it on the terminal window. So, by using the command line and Minicom, we can bridge Arduino and Raspi boards for our application. To achieve this, we use Python program temp1.py to access the serial port of Raspi.

This is how you will be able to see temperature data coming from LM35 connected to Arduino, which is sitting piggyback on Raspi. The temperature output reading on the terminal taken during testing is shown in Fig. 4.

Somnath Bera is an avid user of open source software. Professionally, he is a thermal power expert working as additional general manager at NTPC Ltd.