Dilin Anand is a senior assistant editor at EFY -- Anagha P. is a technical correspondent at EFY

Technology-aided behaviour analysis and modification has been there since four years now. However, earlier devices had the tendency to be more about delivering technology in a wearable device than about affecting behavioural change in the user.

Two researchers from Mayo Clinic Centre for Innovation had reviewed a smartband in 2011 on Mayo Blog. While they believed the technology would work, manual data syncing, poor battery life, lack of data privacy and wired connections all pointed towards a lacklustre hardware design.

Proof that wearable electronics have matured was on show at CES 2015. Both niche companies like Jawbone and tech giants like Samsung have learnt that awkward and clumsy designs do not appeal to anyone except geeks and early technology adopters.

While year 2014 saw a lot of start-ups in this area with most generating healthy business, 2015 will probably be the year when consumers decide the winners and losers.

Balancing act with the battery
Since wearables are usually small, the batteries included in these are also small and have limited capacity. Fortunately, there are ways to increase the life of a battery.

Offloading data processing onto a cloud server or smartphone is an effective way to ensure that power-consuming calculations are done elsewhere, and the device itself focuses on what it does best, that is, data collection and, in some cases, presenting the results in an easy-to-understand way. When you offload the processing, it also means that you need not have a powerful processor on your device any more.

Why this discrepancy? Although both run on ARM Cortex-M4 MCUs, Microsoft Band runs on Freescale’s Kinetis K24 MCU, which has its central processing unit (CPU) clocked at 120MHz. On the other hand, Samsung’s device runs an MCU at 180MHz. Factors like 3.6cm versus 4.6cm (1.4-inch versus 1.8-inch) screen size, display technology and sensors also affect battery life.

There is also the option of doing what Garmin did with their Vívofit, that is, powering it using a classic Panasonic CR1632 3V lithium-coin battery. This might, however, work only for lightly-featured devices since Vívofit runs on a Cortex-M0 based processor (Samsung and Microsoft devices run on Cortex-M4 processors).

What is the difference? A Cortex-M4 has single-instruction multiple-data (SIMD) and floating-point capabilities that let it process magnitudes faster than Cortex-M0, with the fallout being power consumption, which is magnitudes higher.

It is also possible to optimise the code running on an existing device to improve its performance or battery life. We first saw this being done by Elon Musk for his Tesla cars, when over-the-air (OTA) software updates increased the speed and range of the cars. 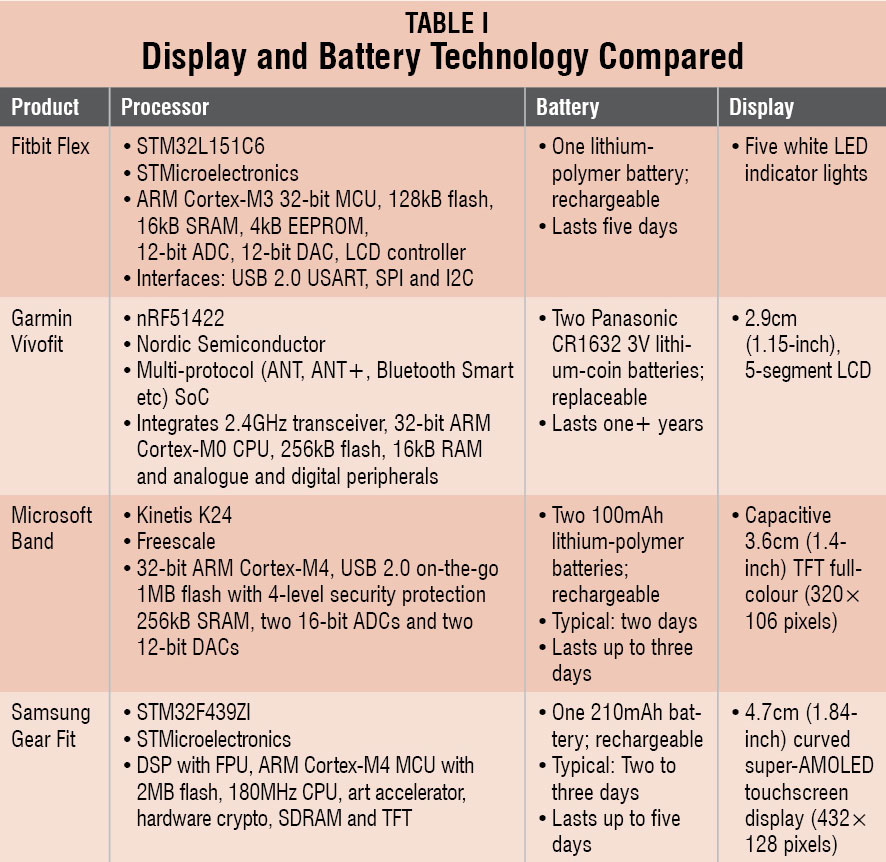 In the wearables space, Jawbone launched a software update last year that effectively doubled the devices’ battery life. From a user standpoint, this was very satisfying, as it meant that the user only had to charge the device twice a month as opposed to once a week, according to Arvind Sanjeev, founder of DIYHacking.com and creator of the indigenous Google Glass clone.

Sanjeev adds that the next thing would be the charging port of the device. Since conventional micro-USB slots make the device bulky, custom solutions and docking ports should be designed specifically for each wearable.

“The most interesting challenge while designing our wearable was to figure out how to collect the data we need and still use extremely low power. Our device, a pair of smart insoles that monitor a runner’s running style and form while he or she is running, uses a small rechargeable battery. We had to invent a novel way of collecting data that could get us all the data we need but consume extremely little power,” explains Anshuman Singh, co-founder of ReTiSense and inventor of Stridalyser.

The primary design challenges that go into these wearables start with the selection of the right low-power sensors and low-power communication technology. Optimising the functioning of the device to minimise the current drawn by the product and its sensors, and power profile for communication of data to the smartphone or other companion device, could help control power consumption.