The project here demonstrates how to get location (latitude and longitude), time, date, speed and course-angle information using a GPS receiver. It uses 8-bit AVR microcontroller (MCU) ATmega16A (ATMega32 was used by the author) to get data from the GPS re -- By Ashutosh M. Bhatt 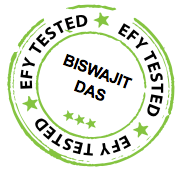 A global positioning system (GPS) receiver is used to get precise geographical location by receiving information from satellites. It not only gives information about location but also information like time, date, height and speed. It is so useful that most smartphones are embedded with it.

GPS receivers have many applications in aircraft, ships, sea vessels and the like for navigation purposes. Smartphones with maps (like Google Maps) find routes to a specific destination such as a restaurant, hospital or hotel. With the help of a GPS, a target camp can be located and a missile launched to destroy it.

The GPS receiver module includes an antenna and a built-in processor. The built-in processor calculates the required information from the signals’ output serially in form of strings using NMEA (expanded as National Marine Electronics Association) 0183 protocol. These strings are received serially by the host computer for display or by host processor/controller to take any decision or action.

The project here demonstrates how to get location (latitude and longitude), time, date, speed and course-angle information using a GPS receiver. It uses 8-bit AVR microcontroller (MCU) ATmega16A (ATMega32 was used by the author) to get data from the GPS receiver and display it on an LCD. All this information is combined in a single string that starts with $GPRMC tag.

The complete string is of 65 to 70 characters including start tag. The time, that is, Greenwich Mean Time (GMT) or Coordinated Universal Time (UTC) immediately follows start tag. It can be in 1ms, 10ms or 100ms resolution. Then there is location information that includes latitude and longitude with direction.

Therefore in this single string we get all the information. The AVR MCU extracts this string from GPS output and further extracts all required details and displays these on the LCD in proper format. Author’s prototype is shown in Fig. 1. GPS receiver used for this prototype is a marine GPS receiver MR-600 and a sunrom GPS receiver (1216) with an active antenna. 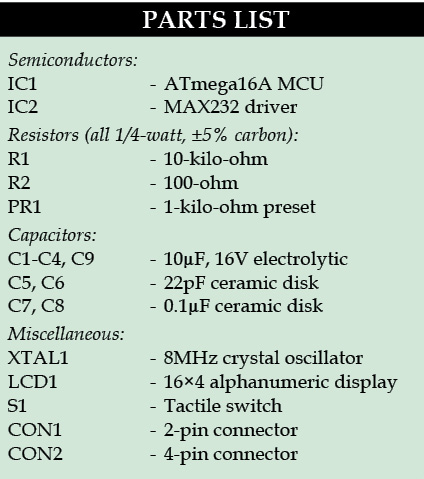 As shown in Fig. 3, the circuit is built with AVR MCU ATmega16A (IC1), RS232-level converter chip MAX232 (IC2) and a 16×4 LCD panel (LCD1). The GPS module has three terminals for interfacing, namely, Tx, Rx and Gnd. It gives a series of strings as serial output, which is connected to RS232-level side-input pin R2IN (pin 8). Output is taken from TTL-level side-output pin R2OUT (pin 9), which is given to serial receive pin RXD (pin 14) of IC1.

Operation of the circuit depends on the GPS receiver module. IC1 receives a series of strings from the GPS module and extracts the required string from a bunch of ten strings in real-time. Out of these, it extracts the string that starts with $GPRMC. It simply discards all others.

From the extracted string, it extracts all necessary information like time, date, latitude, longitude, speed and course angle. At last it displays all extracted details on the LCD panel.

Functionalities of the AVR MCU are due to the program embedded into its internal flash memory. The software program is written in C language using AVR studio software. It is compiled using GCC compiler available with AVR studio. When the program is compiled successfully, it generates a hex file, which is loaded into ATmega16A using AVR SPI programmer.

C program is made up of 12 different functions described as follows:

An actual-size, single-side PCB for the GPS receiver is shown in Fig. 4 and its component layout in Fig. 5.

Ashutosh M. Bhatt is M.Tech in embedded systems. Currently, he is a lecturer of electronics and radio engineering at government polytechnic, Jamnagar, Gujarat