By Jitendra Jangir and V.K. Shukla

This is an Internet of Things (IoT) based irrigation system that automatically turns on water-pump when soil moisture in the field goes below the set threshold level. It has three parts—transmitter, receiver, and the IoT system—as may be seen from its block diagram in Fig. 1.

Besides the IoT, the circuit comprises transmitter and receiver whose diagrams are shown in Fig. 2 and Fig. 3, respectively.

Threshold level of the soil moisture can be set using the in-built pot in soil sensor module. When soil moisture in the field goes below the threshold level, the sensor produces active low (0V) signal, which goes to the base of inverting transistor T1. Encoder IC1 receives active-high signal at pin 10 (AD8) from collector of T1 and generates serial data at pin 17 (DOUT) with its address pins A0 through A7 connected to ground. The modulated ASK RF signal from DOUT is transmitted by TX1 module at 433MHz frequency. J1 is used for optional sensor input for an optional motor in the receiver circuit.

The signal from transmitter is received by 433MHz receiver module RX1. Decoder HT12D, with address pins A0 though A7 connected to ground, receives the serial data at its pin 14 from RX1. Data pin D8 of IC2 drives the relay through transistors T2 and T3.

Diode 1N4007 (D2) connected in reverse bias mode is used to protect the circuit against voltage spikes during switching on/off of the water-pump. LED3 is for power on indication, LED4 for RF signal, and LED1 for water-pump’s motor on status. If optional sensor is used at J1 in the transmitter, LED2 indicates the optional motor’s status. 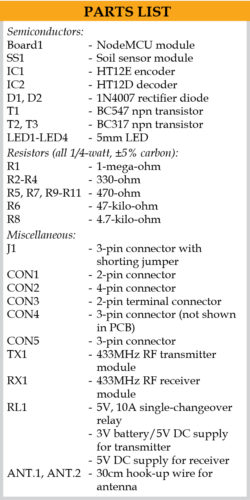 The heart of the IoT system is NodeMCU ESP32/8266 Wi-Fi module. Data pin D8 of IC2 is connected to pin D0 of NodeMCUmodule (Board1) to provide the motor on/off status on a remote computer or smartphone over cloud. Adafruit IoT platform is used to monitor the water-pump’s status online.

When soil is adequately wet, SS1 output pin D0 is low, which makes transistor T1 to stop conduction. So, collector voltage of T1 becomes high (5V), which is connected to pin AD8 of IC1. Transmitter TX1 transmits this signal, which is received by receiver RX1, decoded, and passed on to transistor T2 through resistor R10. So, T2 conducts making its collector low, which turns transistor T3 off. This de-energises relay RL1 and the pump connected to it is switched off.

When soil is dry, SS1 output pin D0 is high, which makes transistor T1 to conduct. So, collector voltage of T1 becomes low (0V), which is connected to pin AD8 of IC1.

Transmitter TX1 transmits this signal, which is received by receiver RX1, decoded, and passed on to transistor T2. This makes transistor T3 to conduct and energise relay RL1, making the pump switch on.

1. Open https://io.adafruit.com website. Create an account with a unique username. Note down this username as it will be used in Arduino code (program_soil.ino) later.

2. Generate a key and note down this key. This is a long, unique identifier that you use to authenticate any device using your account. You get one key per account, but you can revoke and regenerate your key any time.

3. After creating an account, you need to manage your feeds for publishing on the dashboard. (Feeds is basically a set of data that you can read or write, as specified in the program, as per your application.) In this project, we used Relay1 on the dashboard, as shown in Figs 6 and 7.

Arduino IDE is used for programming the NodeMCU board (Board1). The Arduino code ‘program_soil.ino’ is to be uploaded into NodeMCU board before connecting it to the receiver circuit.

Connect the NodeMCU to PC/laptop and select proper COM port and board name from Tools menu of the Arduino IDE. The board name we used in this project is ‘NodeMCU 1.0 ESP-12E Module.’ The board name will depend on the model you are using.

Before compiling and uploading the source code, do not forget to include ESP8266WiFi.h, Adafruit, and MQTT libraries from Library Manager. Also, you need to add the ‘package_esp8266com_index.json’ package under Preferences in your Arduino IDE, as shown in Fig. 8.

Next, open program_soil.ino code from Arduino IDE and make some changes, such as Wifi SSID, password, Adafruit username, and key with your own credentials, as shown in the code below:

Now, compile and upload the source code to the NodeMCU board by clicking on the Upload button.

An actual-size PCB layout for the transmitter is shown in Fig. 9 and its components layout in Fig. 10. After assembling the circuit on PCB, connect 5V supply across CON1.

An actual-size PCB layout for receiver is shown in Fig. 11 and its components layout in Fig. 12. After assembling the circuit on PCB, connect another 5V supply across CON3. Use a 5V, 10A contact-rating relay for RL1. As relay RL1 is not PCB-mounted, connect its coil to the PCB where it is marked RL1. Connect the water-pump’s power on/off switch across Pole and NO contacts of the relay.

in transmitter and receiver circuits (Fig. 2 and Fig. 3), the expected signals at different points are listed in Table 1.

V.K. Shukla retired as director at Directorate General of Training, Ministry of Skill Development and Entrepreneurship, government of India