Solar Light For A Portable Toilet

Despite being more expensive than standard permanent outdoor toilets, portable toilets (Fig. 1) have several significant benefits as these are self-contained and can be placed almost anywhere. These days portable toilets are frequently seen at outdoor areas like construction sites, farms, campsites and even street-sides. Solar power provides an ideal solution for applications where lighting is required in portable toilets that are located away from a mains supply grid, or the installation is expected to be on the site for a brief period.

Here is a circuit of a self-contained solar light for portable toilet lighting applications. The solar light housed within its own enclosure comprises a solar charger, rechargeable battery pack, white LED light source and PIR motion sensor as an occupancy sensor. The occupancy sensor (motion sensor) activates the light source and, after the booth has been vacated (or when there is no valid motion), the lighting switches off to save battery.

The circuit may be split into two sections: the charger and the sensing and control system. Power is supplied via the 9V, 450mA-rated polycrystalline solar panel, which is linked to CON1 and charges the 4.8V, 1800mAh battery pack, BATT.1, via the constant-current charger built around IC1. The 6.8-ohm resistor (R1) limits the charging current to near one-tenth rate of the battery, that is, 180mA. 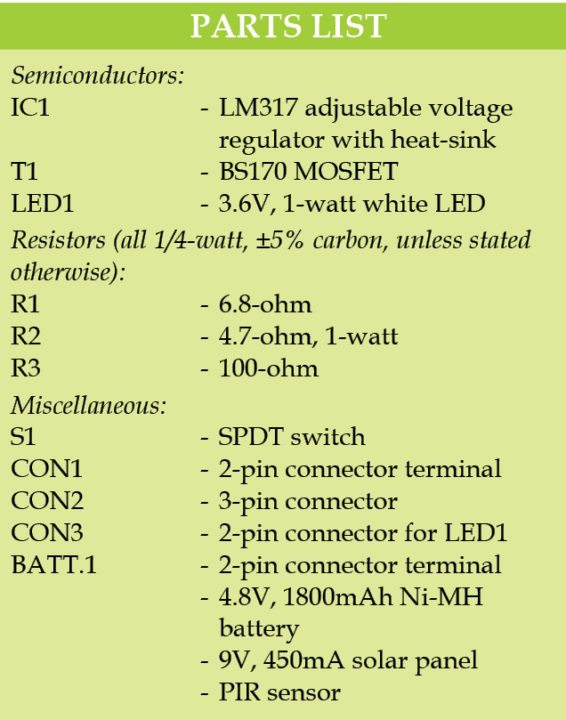 The sensing and control circuitry is based on PIR motion detector module (Fig. 3), which is connected across CON2. When a valid motion is detected, output of the PIR sensor goes to around 3.3V and the light source LED1 (3.6V, 1W white LED) is switched on through medium-power MOSFET BS170 for a finite time. The 4.7-ohm, 1W resistor R2 limits the operating current of the white LED.

A PCB for the solar light for a portable toilet is shown in Fig. 4 and its component layout in Fig. 5. Enclose the PCB in a suitable small box in such a way that it can be fitted in the toilet.

After assembling the PCB board, connect the fully-charged battery pack BATT.1 to the circuit and switch on S1. The PIR motion sensor detector requires an initialisation time of about 60 seconds (or even up to three minutes). Thereafter, it enters standby mode, ready for detection.

The solar panel (not fitted within the enclosure) can be mounted at an appropriate location. Battery pack BATT.1 is best linked to the circuit via two flexible, well-insulated multi-strand wires. Then, a heat-sink should be added to IC LM317.

Finally, house the assembled PCB in a small plastic case with holes drilled for the connectors for linking the solar panel, switch S1, LED1 and PIR motion sensor. The suggested enclosure is shown in Fig. 6.

Connect LED1 externally, with a proper heat-sink, to CON3 in the PCB.