Conventionally, LED streetlights house the driver unit and LED units in a single box. The electronic driver adds heat within the box, affecting the performance and reliability of the steetlight. Greenstar Engineering has refreshed this approach to come up with better managed streetlights. Take a look -- JALAJA RAMANUNNI 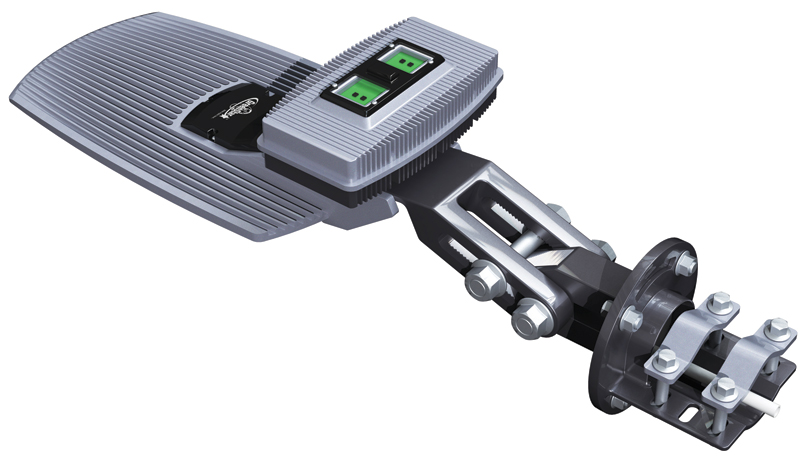 Thermal management in LED streetlights is a constant challenge throughout their existence. To overcome this, Greenstar Engineering (an engineering arm of Greenstar Products Inc., US), based out of Gurgaon (Haryana), decided to design its own casings, drivers and optics for maximum control over product development. The Galaxy XD sensor-based LED streetlight designed by it dissipates away any heat produced in the LED casing immediately and provides ease of adjustability and flexibility of the application. The company holds patents for the overall design of the light, its heat management system, adjustable mounting mechanism and also for use of semiconductor-based sensors controlled by a microcontroller.

LEDs separated from the driver
The normal approach to create an LED streetlight is to house the driver unit and LEDs together in a box. “Keeping the two components together in a single box is not a good arrangement because temperature is of critical importance in LED streetlights, and the electronic driver adds heat within the box,” explains Prashant Chandra, director of engineering and vice president-design and marketing, Greenstar Engineering.

Project built from the scratch
“Thermal management was our top priority, as we realised that heat management could make or break an LED-based product in terms of its long-term reliability and performance. We decided to refresh the approach and keep the LEDs separate from the driver,” Chandra adds. However, this was no easy feat to accomplish. Greenstar designed the casing from scratch to ensure a high level of thermal management.

“For this, we studied heat dissipation in detail and designed our lights accordingly. Our heat sinking system is a result of our studies and experiments at our R&D lab,” reveals Chandra. While keeping the LED and driver separate, Greenstar made sure not to compromise on the build quality of light. “It was simple to harness the cables when the two were closer. Instead of using the same wires, we provided the driver and LEDs with separate power supplies,” Chandra explains.

Similarly, on the driver side, the company developed their own modular platform keeping in mind its future expansion to incorporate innovative functions. Designing the driver to be affordable yet future-ready was a key challenge.

Chandra claims, “The drives comprises some of the best components from companies like Texas Instruments, Panasonic and Sharp. All our hardware at the component and system level are UL-certified and therefore follow a high level of safety and reliability norms.”

One modular platform for a range of applications
The adjustable mounting bracket is a unique concept where the light can be mounted at any angle between 0 to 90 degrees. This has opened the usability of the casing not just for streetlights but also for building facade, sports stadium and parking lot lighting. The lights being modular in design, the same basic platform can be used to create nine different models.

Chandra confesses, “Creating a driver design where the lumens-per-watt efficacy remains constant while the light is modular was difficult to achieve. We created a modular casing and driver, which could cover a range of 45 watts to 175 watts lights. Other manufacturers offer different models for different wattages.”

Moreover, conventional LED casings are designed such that there is an air pocket within the lighting structure to contain heat, which makes the air pocket act like an oven. Greenstar decided to avoid this air gap in Galaxy XD casing with a zero-air-gap ‘unibody’ construction. Any heat produced within the structure is immediately dissipated. Due to the space saved, the casing structure looks more compact, slim and slender.

New approach to sensors
Sensor-based streetlights have existed for a while, but Greenstar claims to have used a different approach. Chandra illustrates, “We use four semiconductor-based sensors in our lights, controlled by a microcontroller. These are configurable as per the specific requirements of the users. The microcontroller gives a higher degree of control on how the sensors work. As a result, functions like dimming can be precisely controlled. Besides, it offers four levels of redundancy, which ensures that the sensors are always accurate, under all circumstances.” Moreover, since the sensors are semiconductor devices, these are highly reliable. If any of the sensors fails, the others automatically provide a backup.

Chandra admits, “The stage where hardware and software come together was the most pressurising one. We worked very closely with our hardware complement suppliers. Our engineers travelled frequently to the component manufacturers’ location and worked with their teams.”