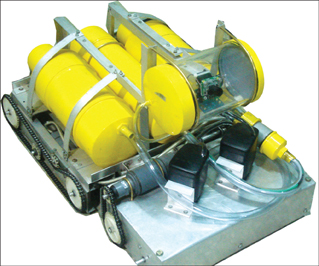 Fantasies depicted in TV shows such as The Jetsons and Futurama are increasingly getting closer to reality. A step in this direction is the robot created by Gridbots to clean water tanks while these are still filled with water.

Gridbots was established in 2007 in Rajasthan with an aim to develop robots that can solve real-world problems. Pulkit Gaur, founder and chief technology officer, observed that water was scarce in Rajasthan and Gujarat, and cleaning water tanks was not a common practice as the only way to clean a tank was to empty it and clean manually, causing wastage of water.

To avoid wastage of water, people filtered water through a multi-layered cloth instead, which did not help much in removing germs that are present at the bottom of water tanks.

Gaur and his team started working on a prototype that could clean water tanks without wasting water. Within three months, Gaur’s team created a new mechanism for cleaning water storage tanks that did not cause downtime or wastage of water. They named it SaUsR, short for ‘smart autonomous underwater service robot.’ SaUsR’s low power consumption, small size and light weight set it apart from other tank cleaning devices. Cleaning of the tank while water is still in it reduced water wastage to 5-10 per cent of the tank water.

“We have devised the complete system after a long research on water tanks, especially those found in Rajasthan and Maharashtra,” shares Gaur.

The robot weighs 30 kilograms and works off a single-phase power supply. It is 61 cm (2 feet) wide and as much long, which ensures that it can easily get into Indian water tanks. A 91×61 cm2 model is being worked upon for industrial purposes. A 50-metre cable is attached to the robot. Hence the robot can cover as much depth with a linear speed of five centimetres per second and underwater payload (carrying capacity) of 30 kilograms.

SaUsR consumes 500-800 watts of power based on load conditions. Shelf life is estimated to be five years. SaUsR cannot be purchased yet, but it can be leased from Gridbots for Rs 1.5 million a year. Most of this amount is refundable.

SaUsR has a specially designed waterproof locomotion system to work underwater. It uses a simple cleaning and suction mechanism that is particularly suited for cleaning the sludge found in Indian tanks. Gridbots developed waterproof drive electronic components that let the user control the motor and navigate it using a laptop. The team used parts such as three-phase motors, heavy suction systems and pneumatic systems. They also developed a waterproof camera with a pan-tilt mechanism to provide a video feed of the tank.

The machine consists of three units—the waterproof robot unit that can move underwater and be controlled with a remote, a pumping unit and a counter suction unit with a cavity. The robot inserted into the tank uses visual sensors with high-resolution cameras mounted on its back to provide live video for better control. It uses light-emitting diodes for lighting and sensors for direction, temperature and acidity measurements. The body is made up of anodised aluminium, which is rendered waterproof by coating it with hard chromium.

The bump sensor lets the robot know it has collided with something and this is communicated to the user. The digital pressure gauge determines the pressure on the robot’s body. If the pressure underwater exceeds a certain value, it chokes. This information shows up on the user’s laptop so that the robot can be pulled up.

Once SaUsR reaches the bottom of the tank, the counter suction unit gets into action. It has two brushes in a cavity that rotate in different directions using coreless DC motors with very high-precision gearing mechanism. This scrubs the sludge ‘off’ and creates a whirlpool of water and the sludge. The pumping unit quickly sucks out the mixture of water and sludge.

The user can choose from two pumping mechanisms. In one method, the unit sucks out the contaminated water and disposes it of using an outlet pipe. In the other method, a filter attached to the robot separates the sludge deposit from the contaminated mixture while it is still under the cavity.

Gridbots has applied for patents for the underwater actuator design, the cleaning system design and the control system of the actuators.

Hurdles along the way

Keeping the weight of the device low and ensuring minimal power consumption was a big challenge.

Gaur shares, “We developed our own device using minimal hardware and gave the system the power to self-lock, that is, components go into sleep mode when they are not in use. For instance, when the camera is not in use, it goes blank and consumes much less power than it usually does.”