NEPCON: Why I Felt Hot In Japan Even In January

Emerging trends in wearable electronics, manufacturing lines and automobiles brought to you from NEPCON Japan.

I was lucky enough to be there at NEPCON Japan and attend various co-located shows including Wearable Electronics Expo 2018. With 2500-plus exhibitors, it was almost impossible to even pass through all exhibitor booths, so I focused on sectors where a lot of innovations and technologies were being announced. Here are some of the key trends I would like to share with you…

This is a very hot sector comprising diverse players including chemicals, materials, components and chips, modules, devices and service providers.

Within wearables, smart glasses are gaining momentum. Multiple players are ready with their solutions. Some have already launched their glasses, while others are about to introduce them this year. The billion dollar question is: Will 2018 be the tipping point for this product category?

Smart glasses are still very expensive, starting from US$ 1000. While Google and Microsoft are already the champions in this category, and are developing platforms based on which others can provide solutions to their customers, Japanese brands seem to be developing their own glasses along with software stacks for specific customers, thus controlling their go-to-market destiny. They are also open to connect with distributors and system integrators who can use their technology to develop or resell solutions in other nations.

Westunitis demonstrated two different offerings: Infolinker smart glasses with an inbuilt fully-powered computer that can do all data crunching by itself, and PicoLinker ‘display only’ smart glasses that stream data via Bluetooth from any mobile device. 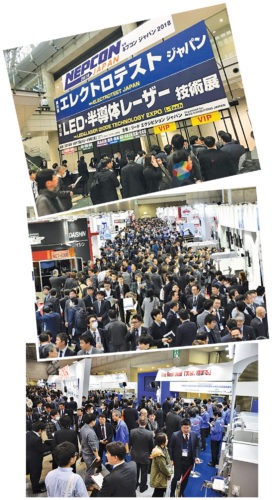 BLINCAM demonstrated a cute wearable camera that attaches to your spectacles or sunglasses and allows you to take pictures by blinking your eye (in a particular fashion).

That means you can experience a great performance without having to disturb your view with your camera or mobile phone, and clap louder too!

Boston Club, a leading Japanese eyewear OEM and ODM, showcased neoplug np-001, which is essentially a smart attachment and detachment slide system for you to put your wearable on your glasses. According to Boston Club team, neoplug is a great platform for both optical frame manufacturers and wearable device developers to grow their respective markets.

JMACS demonstrated four different models of smart glasses under nvEye series. Their smart glasses are designed to help seniors supervise remote workers in real time, see the exact challenges faced by them and give precise instructions. These can also be used for remote training. The glasses are to be worn by remote workers, so that the supervisor can monitor their work from anywhere on his computing device.

Other innovative solutions demonstrated for business users were wearable RFID and barcode scanners by Welcat, touchless floating signage system by JMACS, and bone conduction earphones by BOCO that enable you to listen to instructions from colleagues and even speak while keeping your ears free to hear.

While Fitbit demonstrated its popular range of fitness bands and watches, it saw competition from players like Nanovivo (another USA firm), which claimed its WellSign to be the world’s first wearable that can monitor users’ fat on a molecular level using a non-invasive photonic sensor!

Prototypes of a new type of rubber were demonstrated by Toyoda Gosei (a Toyota Group company). Called e-Rubber, this rubber expands or contracts with passage of current, and will be an important material for artificial muscles. As it is also an excellent tactile sensor, it is being engineered to enable softness in material handling by robots.

Currently, the investment cost for users includes both capex (buy the device) and opex (pay for the service). However, as the industry matures and more investments pour in, we could see more ‘pay as you go’ solution providers.

From powertrain to dashboard, infotainment to safety, and connectivity to managing all aspects of an electric vehicle, the role of electronics is expanding rapidly in the automotive industry. Your mobile phone could soon be the key of your car and help you manage a lot of functions of your vehicle—it will not only open doors but also turn on the ignition and tell your car the exact settings for its interiors (such as the position of steering wheel and seat) as per your liking.

Your mirrors could be replaced with cameras and screens, and you will see everything on your instrument cluster (dashboard). Some images might also be projected onto your windscreen. Thanks to specialised image sensors, the car will monitor your vitals and warn you if it detects any abnormality that may affect your driving. I suspect soon the cars may refuse to move if they detect you are drunk!

Automatic defrosting of vehicles is being enabled by accurate temperature sensing of the windshield and control of the air-conditioner to avoid the same. Thus it also enables better fuel efficiency—a must-have for EVs.

Newly introduced chips make vehicles more reliable despite increasing level of their electronics content. For example, ROHM claims to have introduced the world’s first chipset that allows the panel to continue displaying critical information (speed, fuel level, etc) even if the GPU of the instrument panel (aka dashboard) conks off.

As EV makers push more power components in a smaller area, heat tolerance has become an important attribute for components. Thus, quite a few components were demonstrated that can withstand operating conditions like extreme temperature and humidity. Murata, for example, demonstrated a high-temperature film capacitor (FH series) that is said to operate at temperatures up to 125ºC compared to 105ºC limit for conventional capacitors!
Did you know that mobile handset firm Blackberry has a subsidiary called Blackberry QNX? QNX, it seems, has managed to survive and thrive, while its parent witnessed ups and downs. It used a Jaguar (from Tata, India) to showcase its entire range of solutions, including operating system, development tools and embedded system engineering services.

At NEPCON, Yamaha, Fuji and Panasonic introduced machines for faster electronics manufacturing. M2M and smart factory trend is catching on. Companies like Fuji are working with other equipment providers (like Omron) to ensure that their equipment can speak to each other and make the overall manufacturing line smarter.

Yamaha claims to have developed the fastest chip-shooters for single-beam, double-beam and four-beam configurations. Fuji is pitching the idea of a DARK production floor, where human presence will be negligible. Instead, humans will manage the entire production from their PCs in the office. Robots that take components from warehouse and load them onto SMT machines were also demonstrated by Fuji and Omron.

Overall, the key movement is towards central information, thanks to IOTisation of the entire manufacturing line. Many vendors are touting IOT-capability of their equipment and showcasing software solutions that enable better preventive maintenance and provide critical data and reports to enable production optimisation.