With technology advancing at a rapid space, it is inevitable that there will be a continual stream of new products and solutions in the evolving security industry. Video analytics is the latest solution to generate immense interest within the industry. Analysts like IMS predict that the market for analytics software alone will be worth hundreds of millions of dollars within the next two to three years. The rationale behind the strong acceptance of this solution is its capability to reduce human interventions to a great extent.

What is video analytics technology?
Video analytics or intelligent video surveillance (IVS) is a technology that uses software to automatically identify specific objects, behaviour or attitudes in video footage. It is basically used for intrusion detection. It transfers to the software the human interventions normally required to detect intrusions. It has the capability to analyse a video frame or a group of video frames to detect, classify, recognise or identify a predetermined event that has been programmed through the IVS software. It uses mathematical algorithms to detect moving objects in an image and filter non-relevant movements. It then creates a database that records the attributes of all the objects detected and their movement.

Video analytics technology works best for large infrastructures, such as a mass transit system, where over a thousand surveillance cameras may be deployed. These installations represent a huge amount of video to transmit, view and archive, making it impossible for a human monitor to analyse all these video recordings in order to detect suspicious behaviour or events.

Explains Ramakrishna Sundaram, executive vice president and head, Building Technologies Division, Infrastructure and Cities Sector, Siemens, “When a large number of cameras cover a wider area, it becomes difficult to depend on the human eye alone. Here we need to depend upon IVS software, for example, to accurately recognise a face in a crowd or the number plate of a moving car.”

In short, video analytics technology will enable users to manage a vast mass of undifferentiated data that they may receive from different cameras and turn it into useful information. This will turn their cameras into predictive tools that will allow them to spot problems brewing and prevent incidents in a more proactive manner, rather than just filming the events for later investigative use.

Informs Mohit Jindal, senior manager, head-sales & operations, AV Systems, “Most video analytics today run on servers, but accelerated PCs are also getting into the act moving the analytic engines closer to the edge of the network where the video cameras themselves are located.”

Shares Sanjeev Sehgal, managing director, Samriddhi Automations (Sparsh), “Video analytics uses a variety of rules, which can be specifically customised both for the scene and the objects being observed, in order to intelligently identify potentially suspicious behaviour.”

By using multiple customised rules and algorithms that will screen out adverse weather, the effects of changing light conditions, and non-critical movement, analytics systems let security staff focus on real incidents rather than getting bogged down with hundreds of false alarms. This technology also requires less time to monitor multiple video feeds within your CCTV system and allows quicker responses. 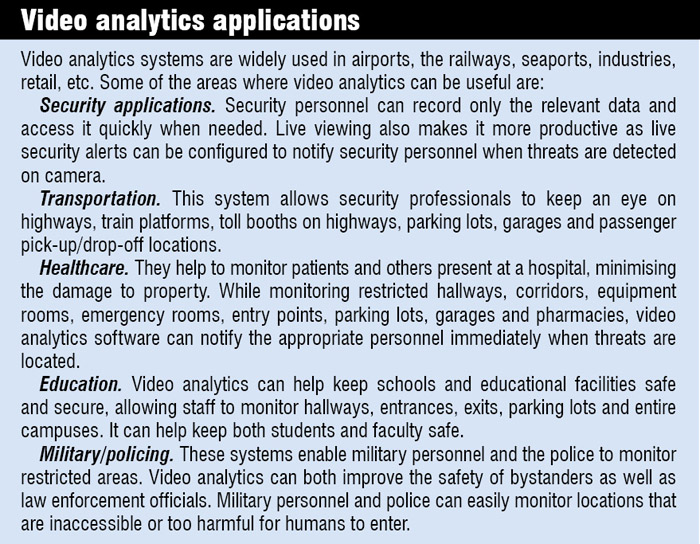 Explains Sahney, “No matter how many cameras a system uses, monitoring everything effectively is a serious challenge. Even by observing one camera for long, an operator can miss out on important activities. Bosch intelligent video analysis (IVA) helps operators to stay focused by introducing a new level of automation to CCTV monitoring. Edge-based, real-time processing identifies alert conditions, giving your security team the information it needs to react swiftly and take action.”

This technology reduces the manpower or security personnel required to watch multiple video monitors at the control room. It can be implemented on water as well. Thus any suspicious movement in a lake front or large pool can be easily traced by this system.

“Since video analytics can be used to transmit only specific scenes of interest, the bandwidth required for its use is significantly less. Many of the embedded analytic algorithms can compensate for various camera issues and quality levels, making it possible to use low-cost cameras or achieve better range and resolution. Closely associated with this is the increasing capability of thermal cameras in the outdoor environment leading to improved detection capabilities at night,” adds Sehgal.

Here are some of the benefits offered by video analytics technology:

Effective management of real-time CCTV video. Video analytics allows you to effectively manage multiple CCTV cameras within a CCTV system. This software watches the cameras for you and notifies you when action needs to be taken. This requires fewer security personnel to watch more cameras than a standard CCTV system. 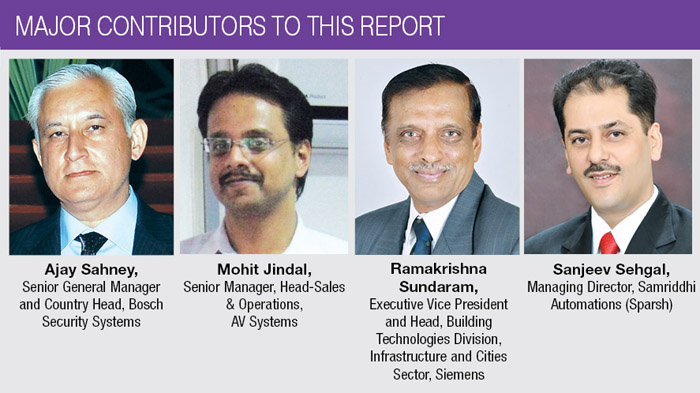 Intelligent motion detection. Video analytics software is based on various algorithms that will analyse the video to determine the type of motion. This means your CCTV system will only look for the true motion of a person or vehicle.

Number plate recognition. This system allows the camera to detect automobile licence plates that can then be integrated in the system for behaviour monitoring. It also allows cameras within the CCTV system to determine the direction the vehicles are heading towards.

Object recognition. Video analytics within a CCTV system also allows one to monitor for missing or unwanted objects.

While the industry is still exploring and weighing its potential, more functions and features are being introduced in these systems. These include smoke detection, behavioural analysis, features for military applications, forensic studies and 3D volumetric analysis.

What’s latest in the market?
Video analytics systems can be used in any camera and customised to run on any specification.

Surveillance Site IQ from Siemens is an automated wide-area video analytics software, which is capable of automated surveillance, and has features like intelligent alarm monitoring and interactive event responses through the analysis of data from cameras and sensors. Widely used for perimeter intrusion detection, this system can classify an object.

Informs Sundaram, “This software requires only 10 pixel changes to classify an object and hence a fewer number of cameras are required. It provides the output on a single screen after collecting and analysing the data from hundreds of cameras and sensors. The data thus collected is represented on a 3D image of the entire site.”

The single-screen philosophy adopted by Siemens helps in utilising the security personnel effectively.

Axis Communications recently introduced a new chip, the ARTPEC-4, which enhances the image quality and video analytics performance in Axis’ network video cameras and video encoders. It is designed to offer video with lower noise and higher light sensitivity for sharper images of moving objects. With a powerful CPU and a co-processor for accelerating video analytics, ARTPEC-4 also has more processing power for intelligent video analysis.

Contrary to the traditional solutions that use a central server to analyse video content, Bosch video analytics is embedded in cameras, making it convenient and efficient. Bosch IVA performs multi-level image analysis of pixels, textures and motion content, from inside the camera.

Shares Sahney, “Using distributed intelligence, Bosch IVA creates a far more robust system. It has no central server and therefore no single point of failure. The IVA operates independently in each component—even if one camera or encoder fails, the rest of the system remains fully functional.”

The author is assistant editor at EFY. The article is reproduced from Electronics Bazaar magazine of EFY Group