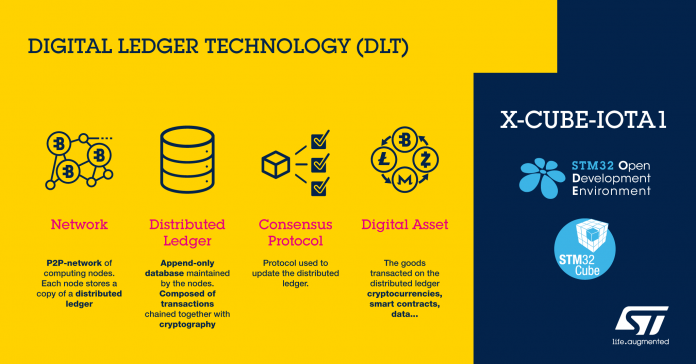 IoT systems are growing exponentially and the DLT(Distributed Ledger Technology) will facilitate this growth further. DLT is used to distribute, exchange, or store data among users via public or private networks. In other words, it is a database stored across various nodes located at different geographical locations. Together IoT and DLT can improve aspects like  convenience, privacy, security, transparency, and speed.

STMicroelectronics has announced the completion, validation, and availability of a fresh new version of the X-CUBE-IOTA1 expansion software package, including integrated IOTA C library, for the STM32Cube microcontroller software development ecosystem. STM32Cube ecosystem is a complete and free development environment for STM32 microcontrollers and microprocessors. The ecosystem is meant for design engineers who want a complete solution for STM32 or work with an IDE like Keil. To enable the IOTA Distributed Ledger Technology (DLT) functions, STM has an X-CUBE-IOTA1 expansion software package for STM32Cube. IOTA allows people and machines to transfer money and/or data without any transaction fees in a trustless, permission less and decentralized environment. This technology even makes micro-payments possible without the need of a trusted intermediary of any kind. 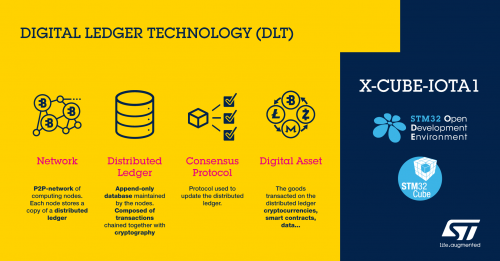 The updated version of X-CUBE-IOTA1 software relies on the highly optimized and robust security algorithms provided by the STM32 Cryptolib. Moreover, it includes FreeRTOS, Wi-Fi management and a complete driver to access motion and environmental sensors on board.

The X-CUBE-IOTA1 expansion software is available for download at ST.com.