The companies Feinhütte Halsbrücke GmbH and Emil Otto GmbH have launched new, flux-filled high-performance solder wires. The basis are two soft solder alloys filled with the newly developed flux compound EO-FC-006. This was specially developed by Emil Otto for processing in solder wires in order to optimise the soldering behaviour as well as smoke and residue behaviour. Both wires were tested on the equipment of Eutect GmbH, which is part of the cooperation.

The solder wire AOX755 is a soft solder developed for the electronics sector, which consists of tin, copper, nickel and germanium. This micro-alloyed solder significantly reduces copper leaching and also has an oxidation-inhibiting effect. The second alloy Sn96.5Ag3Cu0.5 is a standard soft solder consisting of tin, silver and copper. In the technical field, this soft solder is known as SAC305 and is one of the most common solders in the field of component production and cable assembly. 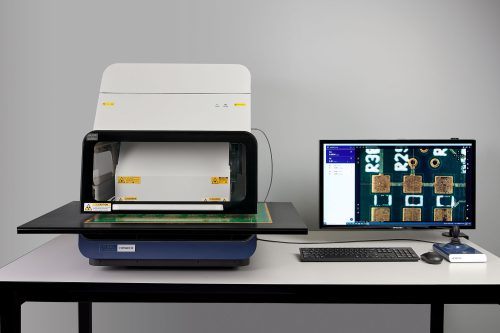 Both solder wires are provided with three cores of the specially produced flux EO-FC-006. The halogenide-free high-performance filler was specially developed as a flux filling for the production of lead-free soft solders. “The filling compound is based on a special synthetic resin in combination with a currently unique synthetic activation complex and thus meets even the highest qualitative production requirements to the highest degree. The activation effect of the filling compound is more than equal to the previous halogenide-containing filling compounds,” explains Markus Geßner, Marketing and Sales Manager at Emil Otto GmbH.

The tests in Eutect’s technical centre were carried out on the laser soldering test facility there. “The interplay of chemical expertise regarding the composition of fluxes on the part of Emil Otto, the metallurgical know-how of Feinhütte Halsbrücke on the subject of solder alloys as well as our process knowledge with regard to selective soldering represent exactly the added value that our customers can expect from this cooperation,” says Managing Director Matthias Fehrenbach, describing the cooperation in the development of these new solder wire products. The wires now being presented are not customer-specific development projects, but rather the solution to an existing problem in assembly production. “However, customer-specific solutions can be developed just as well in our cooperation,” Geßner affirms. Security of supply plays an important role for all three companies. “For us as a consumer goods manufacturer, as well as for Emil Otto, it is crucial to guarantee this security of supply for our customers. For example, we use secondary material for the manufacture of our products, which we purchase in Germany. This makes us independent of supply chains from abroad and also makes an important ecological, sustainable contribution,” explains Tobias Patzig, Managing Director of Halsbrücke Feinhütte GmbH.