Generating Functions For A Diverse Range Of Applications

Not so long ago, dial based function generators were in high demand. With advancing technologies, these have become outdated and now, with computer control, generating a single frequency can be redefined. Additionally, with multi channel generators and digital signal generation, there is not much that cannot be done via a function generator.

Function generators have many applications, ranging from observation of a simple sinusoidal waveform to being used as a signal source to test amplifiers, or to introduce an error signal into a control loop. We also have equipment generating synchronised signals suitable for television and other broadcasts, including horizontal and vertical sync pulses (in analogue) or sync words (in digital). Let us take a look at some of these advancing test and measurement equipment. 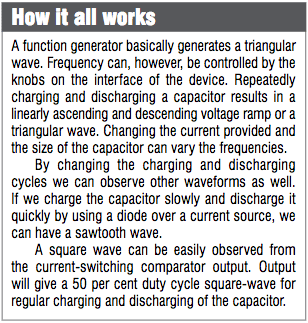 Emerging features in a function generator

Today is an era of computers. If we can control a function generator via a computer, it can become very easy for people to work with it. There are manufacturers developing equipment that can be connected to a computer, and the frequency to be generated can be fine-tuned. Pico Source PG900 series is one such example.

“We see a trend towards multichannel generators, two channels at least, but there is also a need for four channels and more,” says Appalla Srinivasa Rao, manager – product support and application, Rohde & Schwarz India. Such multichannel generators are very fruitful in comparing multiple signals for education purposes, along with testing for optimum performance. “Beside these trends, simple single-channel arbitrary generators are being more and more integrated in other equipment like oscilloscopes, which will significantly reduce the market for this basic type,” explains Rao.

The function genarator acts as a source for a quasi-digital bit-stream that may be modulated by arbitrary analogue waveforms to simulate signal distortion. Bit patterns may have significant length, preventing the use of traditional arbitrary editors, and require modification of the remote command set by adding pattern commands and storing the integrated arbitrary memory.

Another interesting feature is the integration of different devices. Tools like Siglent SDG1025 have incorporated an oscilloscope with the waveform generator in a handy little device. With such equipment, generation of a signal and viewing the signals for analysis can be done on a single device. Today, we have a multitude of devices requiring separate maintenance tools. Development of such equipment is always helpful in reducing the number of equipment on an engineer’s workbench.