3D Printing: The Technology That Changes Everything

Ever since key 3D printing patents expired earlier this year, there has been media frenzy predicting a bigger printing boom about to happen. Let's take a look at the upcoming technologies for 3D printing, and how these could change our world -- Sneha Ambastha

The main benefit of 3D printing is the reduction in time, effort and energy taken to convert a design into a prototype. In a way, you can now build your products at home.

Older technologies like stereolithography (SLA or SL), selective laser sintering (SLS) and fused deposition modelling (FDM) or fused filament fabrication (FFF) are now available risk-free for use and sharing because their patents have expired. This has helped the open source community to increase their role in the enhancement of 3D printing technology. 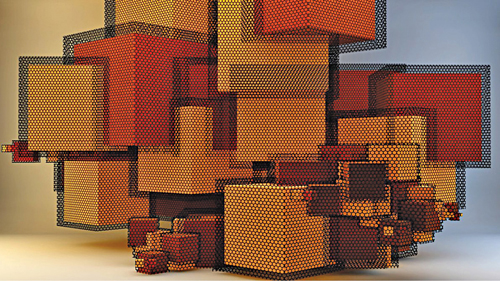 Some time ago, the open source community took up a project called RepRap and popularised FDM 3D printers. Next in line, SLA and SLS are seen as the future of advanced technologies as their patents lapsed this February. This means that these technologies can now easily get into the hands of hackers or tinkerers, enabling them to develop their own software and technologies, and then sell these printers at a lower price, popularising them to a much greater extent than at present. 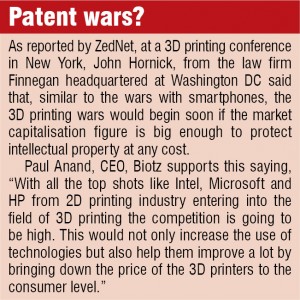 Priya Kuber, managing director, Arduino India says, “I have used an open source 3D printer, Prusa Mendel, which is something on the lines of RepRap. What I found interesting was the software side of the 3D printing.” Priya explains that Slicer is a highly mathematical tool to represent geometry of 3D printing. It slices the complete drawing into small layers and then converts them into a 3D printable format (.stl). “I also used the online tool called TinkerCAD that allowed me to feed an image and create a 3D image file out of it. Now you can feed that file into Slicer and then 3D print it,” she says.

Form 1 and B9 Creator are two open source 3D printers where the latter is completely open source. Form 1 from Formlabs “uses stereolithography technology to achieve a professional print quality that plastic extrusion printers just can’t match. A high-precision optical system directs a laser across a tank of liquid resin, solidifying layers as thin as 25 microns. The build platform pulls your model upwards, out of the tank,” according to the company.

3D printing goes mobile
You can now get your designs fabricated without even being physically close to a printer. It is done through an ‘app.’ The app takes over the designing part, enabling a preview of the final product, and then gives the print command to the 3D printer available nearby. This is like enabling Google’s Cloud Print functionality on your 3D printer.

Karan Chapekar, director, KCbots says, “Autodesk recently launched an app called 123d Catch for IOS7. It captures multiple pictures (about 40) that can be shared online or 3D printed.” Engineers do not have to be near the 3D printer any more. They can prepare the code on their app even when they are travelling and give a print command to their 3D printer kept in their lab or at office. The only requirement is that the mobile phone running the app should be connected to the printer and the printer should be, in turn, connected to Wi-Fi.